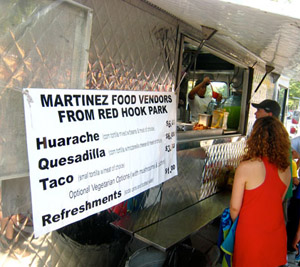 As promised, the beloved Latin food vendors returned to the Red Hook soccer fields this weekend, over a month and a half later than usual. After nearly getting evicted from the park last year, the vendors had to spend thousands of dollars to buy new carts and other equipment to meet the Health Department’s requirements. According to Eater, Cesar Fuentes, leader of the vendors association, called the DOH-mandated changes "a financial and emotional burden… [But] the higher cost would have been to lose the permit, and the tradition...and that we couldn't afford."

Only six stands were open today, with four others still scrambling to get DOH approval. By some accounts, lines were “well over an hour” for the vendors on hand, such as the Martinez huarache truck (pictured). Serious Eats has total coverage from the opening weekend, which featured an appearance by Senator Chuck Schumer, who’s been a champion of the vendors.