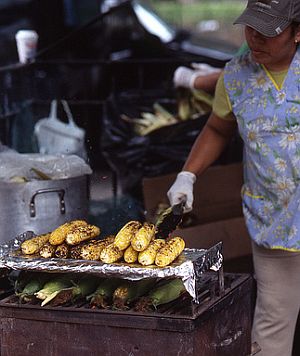 After widespread outrage that the city Parks Department might end more than three decades of Latin American cuisine dished out during weekend soccer games in Red Hook, it was announced yesterday that the longtime vendors have been granted a six year permit. In the end, they were the only group to apply. Last summer the Department of Health cracked down on the vendors for health violations, and it was feared that the vendors would be priced out of the park by new licensing fees.

A Parks Department spokesman says the vendors’ yearly fees, which were approximately $10,000 for the entire group, would rise by only about 5 percent each year. But the costs of upgrading to DoH standards are still burdensome because each vendor needs to purchase equipment estimated to cost $15,000 to $30,000. Vendor's Committee director Cesar Fuentes says two vendors dropped out early on because of the prohibitive costs.

In an email sent last night to thank everyone for their support, Fuentes stressed, “It is important to understand that while this is a tremendous victory for us, we are still facing tremendous challenges ahead before we can consider an official opening date this summer… Every vendor needs to be in full compliance with DOHMH standards & be able to afford costly equipment in order to operate legally."

The solution is obvious: David Byrne, who’s been known to bicycle out to the ballfields for a bite, needs to play some benefit concerts.