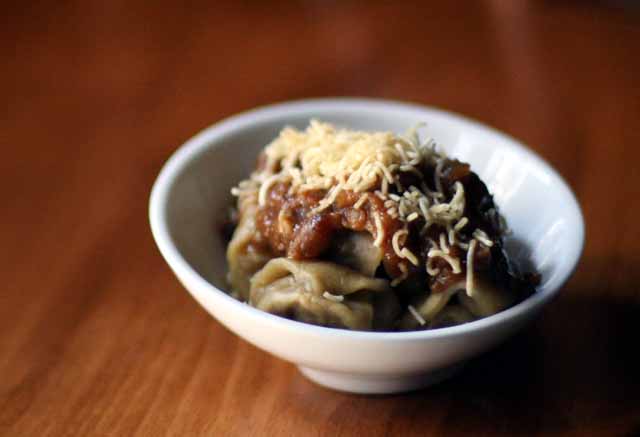 Making fresh pasta at home is fast and easy, and with filled pasta like this, you can freeze it for later meals as well. This latest iteration of our pomegranate walnut sauce is by far the most delicious and intensely flavored. If you don't feel like rolling out pasta, try just braising the pork and serving it with this sauce and store bought pasta instead. Click through for the full recipe!

Pork & Sundried Tomato Cappelletti
for the filling
1 large pork shank (about 1.5-2 lbs, but don't stress too much over it; pork shoulder is a fine substitute if you prefer)
a handful dried chanterelle mushrooms, soaked in hot water to cover
1 bottle pecan beer (or whatever beer you prefer, really)
Salt and freshly ground pepper to taste
A handful of oil-packed sundried tomatoes, drained and minced
for the pasta
250 g all-purpose flour
1 tsp ground cumin
3 eggs
1/4 tsp salt

First, make the filling. Salt and pepper your meat, and sear it until richly browned on all sides. Then add pecan beer and the chanterelle soaking liquid, enough to come about halfway up the side of the meat, or less. Coarsely chop the chanterelles and thrown them in after.

If you have a pressure cooker, cook at high pressure for about 25 minutes, then let the pressure release naturally.

If you don't have a pressure cooker, preheat your oven to about 275 F. Put the braise ingredients in a heavy-bottomed pot or dutch oven. Take a sheet of parchment paper, crumple it up, and soak it in water. Spread it out, all crinkly, down over the meat in the pot. It can touch the meat, that's just fine. Then put a lid on the pot. Braise for a few hours, or until meltingly tender.

Either way, when the meat is done, take it out of the liquid and let it cool enough to handle. (While that's happening, skip ahead and make the pasta dough). When you can, shred it and chop the shreds coarsely. Mix in the chanterelles (strained out of the braising liquid) and the sundried tomatoes. Set aside.

Make the pasta dough by creating a mound of the flour with the other ingredients in the center. Slowly stir them in with a fork, then knead the dough for about 6-8 minutes, until smooth. Form it into a ball and wrap with plastic wrap. Set it aside and let it rest for half an hour. (Skip back and shred your pork now!)

Take 1/3 of the dough at a time, leaving the rest covered until you're ready to deal with it.

If you don't have a pasta maker, you can stretch the dough out by hand instead. Gather the dough you will be working with into a sphere, and flatten it into a disk onto your lightly floured work surface. Using your rolling pin, roll it out into a circle about 1/8″ thick. Remember to think of it as an act of stretching, not compressing. If you are used to compressing dough when you roll it out, just focus on the pushing it away from you and be light when it comes to downward pressure.

Once you have that circle, you are ready to begin stretching your dough in earnest.

Stretching out pasta dough goes like like this: Wrap just the top quarter of the dough, the quarter furthest away from you, around the rolling pin. It may not even wrap all the way around, depending on how much dough you are using at a time. Flick it forward so that it slaps against the work surface. Next, wrap more like a third of the dough around the rolling pin, and then flick that forward to hit the surface. Next, a half. Keep going until you have the entire mass of dough wrapped around your rolling pin, then rotate your rolling pin and flick the dough out so that it unwraps in a thwapTHWACK, slapping the work surface forward and back, and begin the process at the far end again. Keep going until your dough is thin enough, and for stuffed pasta, thin enough is as thin as you can possibly get it.

Either way, once you have your thin sheet of pasta, cut it immediately into squares. Put a small mound of the pork filling in the center of each square, then fold one corner over to the diagonally opposite corner until you have a triangle. Squish the edges together, hard, so that they will stick - they will thin and spread out as you squish them together, which is just fine.

Take the two corners at the ends of the hypotenuse and wrap them around your finger, squishing them together where they overlap. Bend the last corner down backwards, away from the ring. Put aside and do the rest the same way.

To cook your pasta, get a pot of salted water boiling. Fresh pasta takes only 2-3 minutes to cook.

Alternatively, you can freeze the cappelleti on a parchment paper lined baking sheet, and then gather them up into a ziplock bag to store them in the freezer once they're solid. They'll take a bit longer to cook when you start from frozen, of course.

Brown the onion in the oil.

Warm the chicken stock and stir in the saffron. Set it aside to let it steep for 20 minutes.

Once the onions and steeped stock are ready, blend 2/3 of the browned onions in with the saffron-steeped chicken stock. Add the blended mixture back into the pan with the remaining browned onions. Stir in the rest of the ingredients, then simmer for a minute or so to let the flavors combine.

In the photo, you can see that the cappelletti and sauce were also served with sev, a sprinkling of Indian fried chickpea noodles for extra crunch. This is not strictly necessary, but the texture contrast is very tasty