Recipe of the Week: Goose Stew 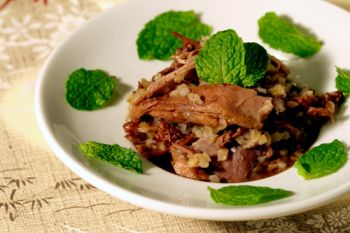 This recipe is adapted from A Drizzle of Honey: The Life and Recipes of Spain's Secret Jews by David M. Gitlitz and Linda Kay Davidson, a cookbook full of recipes for foods cooked and eaten by Jews and conversos in the Iberian Peninsula during the time of the Inquisition.

The recipes were mostly gleaned from testimony denouncing the Jews during the inquisition. Jews were often identified by cultural signs, such as their culinary customs, and servants would be called to testify on the types of food their mistresses would cook. Testimony against them would often allege that they cut the fat and veins from their meat, salted their meat, would not eat pork, or cooked stews on Friday afternoon to eat cold on Saturday. Even cooking meat in olive oil was seen as evidence of secret "Judaizing," because most Christians preferred to cook their meat in rendered fat, particularly lard.

Many of the women whose recipes are given in this cookbook were murdered for cooking these meals. It is a strange feeling, going through this book and reading stories of betrayal and death, each followed by a description of an intriguing dish. Following their recipes feels like a very delicious act of remembrance.

Two nights before you make the stew, scald the goose and make some stock.

Fill a pot with water and bring it to a boil. Scald the goose by placing it in the boiling water for 1 minute (dipping the top for 1 minute and then the bottom for 1 minute.) Pat the goose dry, then set it uncovered on a rack in your fridge to fully dry overnight. This process will make the skin crispier, less fatty, and tastier.

Place the uncooked innards and bay leaf into the scalding water. Cover and simmer for several hours, until tasty. Reduce to intensify the flavor as necessary. Strain and let cool in the fridge overnight.

The next day, roast the goose on a rack over a big roasting pan. Start it on one side, at 400 F. After 30 minutes, rotate it to the other side, and lower the heat to 350 F. After 45 minutes, rotate it breast up, and continue cooking until it hits an internal temperature of 175 F (going by a thermometer stuck in the thickest part of the thigh). Remove it from the oven and cover with aluminum foil and let it rest for 30 minutes, to let it hit an internal temperature of 180 F.

Strain the liquid fat left in the baking pan (there will be quite a lot) and reserve. Freeze whatever you don't use. Potatoes fried in goose fat are delicious.

Eat roast goose and rejoice. Reserve 4 lbs meat for the stew. (Or scale the stew down to match however much meat you do have left.)

The day after that, skim the fat from the stock and pour 6 C stock into a large pot, along with some of the fat to taste. Chop up about 4 lbs leftover roast goose meat and throw it in, too. Add the wine, cinnamon, ginger, black pepper, birdseye pepper, honey, and pomegranate molasses. Cover and gently simmer, covered, for 40 hour.

Add the bulgur and salt and continue to simmer, covered, for 20 more minutes.

Take the lid off and let the stew continue to simmer about 10 minutes more. Add more goose stock (or water) if necessary to fully cook the bulgur.

You can order a goose at Ottamanelli's, a resourceful butcher shop on Bleecker Street just off of 7th Avenue in Manhattan. They can get it on fairly short notice, and charge about $5-6/pound.