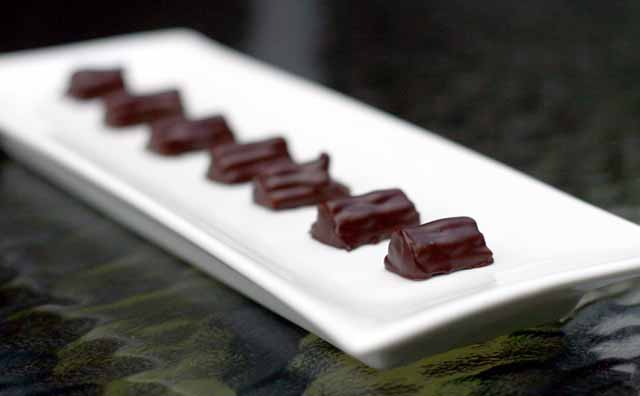 This summer hasn't been too brutal, so there's no reason not to turn on the AC and make candies. These little truffles are addictive and delicious.

To personalize them, you can use whichever spices you prefer to flavor the ganache. If you use milk chocolate instead of dark, however, you'll need to adapt the recipe by using a 1:2.5 ratio of heavy cream to chocolate instead of the 1:2 ratio specified in this recipe for use with approximately 62% chocolate. The recipe follows:

Set the chocolate aside in a bowl.

Stir together the glucose, cinnamon, and heavy cream in a saucepan. Scrape the seeds from the vanilla beans into the cream, then throw the beans in, too. Bring to a boil, whisking to break up the cinnamon, then remove from the heat and pour the cream mixture over the chocolate.

Stir the chocolate into the cream as it melts from the heat of the cream, creating a ganache/emulsion.

Make sure all the chocolate has melted. If it hasn't, melt it very very gently over a warm water bath as needed.

Pour onto a baking sheet in a thin layer, and cover with plastic wrap directly touching the ganache. Set it aside until it reaches a "slightly firm, plastic consistency," which should take about an hour.

In the meantime, roll the marzipan out into a square of about 10"x10" and about 1/16" thick. Trim the edges to make them nice and straight. Eat the trimmings.

Temper at least some of the chocolate you have for dipping. You can find instructions on how to temper chocolate here.

Coat one side of the marzipan square in chocolate.

Once it sets, flip the marzipan chocolate side down. Cut it into strips 1/2" wide.

Stir the ganache and fill it into a pastry bag with a small plain round tip. Pipe two cylinders side by side and then a third cylinder atop and between the other two on each marzipan strip. Sprinkle some ground sichuan peppercorn on top to taste.

Leave them alone to set until they're firm enough to handle. If you're impatient, the quick way to do this is to just stick them in the fridge for a few minutes.

Cut them into pieces about 1" long.

Temper your dipping chocolate and dip the pieces. Put them on parchment paper until they set.