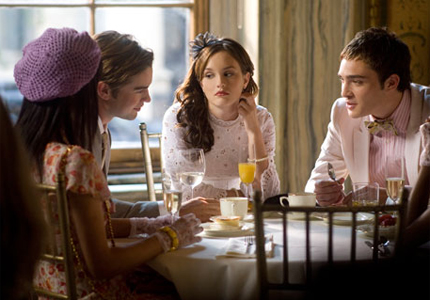 Fans of the neo-Gilded Age New York fantasy show Gossip Girl are so going to love this news: the fictional grilled fontina cheese sandwich with truffle oil ordered by Serena van der Woodsen in the show’s pilot is now a real sandwich! Zagat’s website reports that the item is now permanently part of the bar menu at Gilt – the very location where cameras filmed actress Blake Lively being served the sandwich. Once just a wretched screenwriter’s culinary fantasy, now the reality can be in your mouth for just $50 in the bar/lounge area, which is located in the opulent Palace Hotel. And since Serena was sloshed on martinis in the episode, you'll want to factor in the cost of cocktails to really live the dream.

$50 hardly seems out of the ordinary for anything with the word truffle attached – after all Gilt chef Chris Lee, who played the chef in the pilot episdoe, made news last week by topping Le Cirque’s $7,000 white truffle with the purchase of a 1.51 pound truffle for $8,000. But in a dramatic upset, those two low rollers were subsequently bested by the mother of all truffles, a 3.3-pound fungus sold at auction to Macau casino mogul Stanley Ho for $330,000. (Artist Damien Hirst was bidding but wilted at the 100K mark.) We recently ate truffle shavings at Le Cirque – we’ll start the bidding at $10,000 for the privilege of shaking hands.

But back to GG! Let’s recap all the wining and dining stops on your Gossip Girl Reality Tour. After Gilt, tell the stretch Humvee driver to gun it for The Box, the LES burlesque dinner club that served as the location for Gossip Girl’s "Victrola". And if police raid the club, quickly flush your drugs down the toilet and regroup at the all-night Veselka, which got a GG nod for their famous perogies. Still hungry? See and be seen at Nolita’s Café Habana, where the Brooklyn character Dan Humphrey is believed to have bought a smelly sandwich. Then start all over again the next morning with breakfast at Communitea, where the Humphreys had breakfast. (The show sets it in Brooklyn, but make sure the driver knows it's really in LIC.)

What other stops, besides Hell, can we add to this fabulous Gossip Girl Reality Tour?