Razors in Muffin Give NYU Student a Close Shave 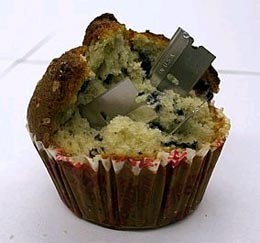 "About halfway through, I bit in and felt something hard and crunchy." That’s what NYU senior Benjamin Jarosch declared after eating part of a found muffin, and he wasn’t talking about a walnut: his innocuous-looking blueberry muffin was stuffed with three razorblades. Jarosch and his buddies had discovered the muffin, along with four others, wrapped in tin foil, upon arriving in the classroom.

It seems they were left over from a previous class and were "props" used by a student to demonstrate "ideas of absurdism and randomness." Professor Heidi White forgot to discard the muffins when class was dismissed, and the professor for the next class knew nothing about the muffin's sharp surprise.

Jarosch’s muffin was the only one with razorblades, and despite eating half of it before noticing anything unusual, he survived uninjured. “I spit them out before they cut. It could have been a lot worse, there's no doubt about it," Jarosch told the Sun.