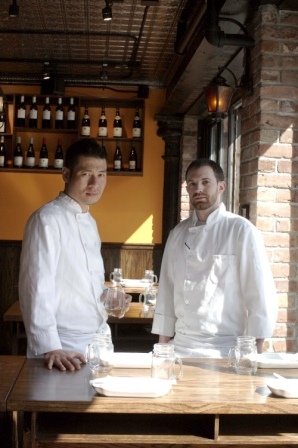 Kampuchea was one of two Cambodian restaurants recently profiled in the Times, where it was accurately pointed out that there is a dearth of Cambodian cuisine in New York. Chef/Owner Ratha Chau and Co-Executive Chef and Partner Scott Burnett are attempting to rectify that. Veering from a more traditional route, they base their menu on Cambodian street food, but add their own creative twists. Ratha and Scott took a break between lunch and dinner service to discuss Kampuchea and Num Pang, their upcoming sandwich shop.

How did Kampuchea come to be?Ratha Chau: We started thinking about opening a Cambodian restaurant and about where to do it and how. I had never cooked for the public before coming here. Before this I was at a place called Ribot; he [Scott] was in the kitchen and I was at the front of the house. Before that was Fleur de Sel, also in the front of the house. I saw a lack of any sort of Cambodian restaurants obviously, and that was really it. I didn’t want it to have traditional, classic dishes. In terms of the look, I didn’t want it to be typically Southeast Asian or even Asian. When you walk into the restaurant, it could go in many different directions. I thought about it in terms of comfort and defining who we are. For the food we wanted to be classically driven in terms of techniques and ingredients but not classic dishes. There’s a huge difference. We never claimed to be classic; we’re not trying to do any fusion or combined flavors. It’s driven by one theory – sticking to the Cambodian techniques and ways and trying to honor that.

What are traditional Cambodian ingredients and techniques? RC: As for ingredients, you’re always looking for prahok, which is a fermented fish, shrimp paste, fermented shrimp, tons of herbs. In terms of style there’s always sweet and sour and a little saltiness. There’s a lot of spiciness from fresh peppers, instead of cooked, and a lot of sauces, sprouts, fresh vegetables.

You worked together at Ribot, a restaurant that had nothing to do with Cambodian cooking. How did you learn about the cuisine? RC: I’m Cambodian. I never lived there as an adult -- I left when I was seven -- but my mom cooked a lot. I’ve eaten at a lot of different family gatherings. There are a lot of restaurants in Lowell, Massachusetts where my mom lives now. It’s like a mini-Cambodia. There are tons of restaurants, mom and pop places. Literally it’s like going to every family’s house, and they all cook very differently. They’re similar, but they add their own tweak. There’s always one group of customers that says “I like this restaurant better,” and you’ll always see the same group going there, they never cross to another place. As for Scott, this man learned this cuisine when he started here. The way we talk about it, the way we put the flavors together. I would have an idea and he would just put it together – that’s how he learned. He didn’t travel. It’s amazing. And it took him maybe a month to pick up the flavors.

Scott Burnett: There was a lot of experimentation with the flavors. Picking things up on the internet and learning about the cuisine.

Where do you shop for Cambodian ingredients in the city? SB: You can just take a walk around Chinatown, but we have a food purveyor. RC: In terms of ideas, we tend to walk around a lot. I would always tell him what’s traditional, and combinations and stuff like that and we’d discuss -- what if we do this and then stay similar, then we can do it. That’s how we always have gotten ideas; bumming around, seeing if different flavors could match.

Has the menu changed a lot since you started initially? RC: Yes, very much so. I wouldn’t say that there is a certain formula, like on October 20th we change the menu. It’s more when we’re ready for it we make the changes.

You used to market yourselves as a noodle bar, but that’s not the case now. Was that a deliberate decision? RC: It is. I think there are plenty of reasons we did it. The way I saw it, our restaurant was Southeast Asian. A majority of the restaurants serve some sort of noodles – they don’t have to say “blah blah noodle bar.” You’re a restaurant, most likely you’re going to serve some sort of noodle. We changed because we’re a full-fledged restaurant; we don’t just serve noodles. We serve an array of things and it seems like Americans, even in New York City, when you label yourself on the sign, it gets stuck into people’s heads that this is what it is and that’s it. Unless you know who we are or have been here before, you assume that there’s nothing else except a bowl of noodles. It’s so difficult when you pigeonhole yourself as one particular type of restaurant, you’re not respected for anything else.

One focus of your menu is num pang sandwiches. You’ll be opening a new sandwich place at the end of October or early November called Num Pang, correct? SB: The place is on 12th Street, right off of University.

RC: It’s right across from the movie theatre on 12th Street. It’s just a sandwich shop. It’s tiny. It has two floors, one is 250 square feet with the kitchen where you order. When you’re done ordering you go upstairs and if you like you can eat up there, or bring it to work.

Are you going to have some of the same nam pang sandwiches you have at Kampuchea? RC: We’re going to have some overlap. We’ll bring in a couple of the classics and then everything else will be different. The difference in terms of the style is that here they’re 11 inches, and there will be 6 inches so it’s quick, it doesn’t have to be this long journey of eating. You can also get two and share with two people.

Speaking of sandwiches, what are some of your favorite sandwiches around the city? SB: The sandwiches at Kampuchea. [Laughs] Yeah, I heard the question.

RC: I love hot dogs. There are a couple of dudes in the city. One on Bleecker and Lafayette. One on Park and I think 18th. I don’t know what happened to him but he used to serve the best hot dog. Ever. It had to do with the way he cooked it – he put the labor of love into that one hot dog. I don’t know. I swear to you. Burger-wise I love going to Goodburger in Union Square.

SB: I really like the tuna fish sandwich down the street at the Spanish place. It’s consistently good, the bread’s toasted right – Italian bread. Perfect amount of tuna, perfect amount of mayonnaise, lettuce and tomato. Never overseasoned, ever. Never overtoasted.

Kampuchea has an open kitchen. Does that have an impact on the restaurant? SB: This is the first open kitchen I’ve worked in. It’s different. It’s nice to be able to interact with people; to actually see that they’re enjoying their food instead of having a server come into the kitchen and say “table 3 gives their compliments” or whatever. It’s nice to shake their hand and say thank you.

Ratha, you never worked in the back of the house before. Did you do anything special to get yourself up to speed? What made you comfortable enough to take that leap? RC: Really the first thought was that I couldn’t find a Cambodian cook to cook my way. I had a couple who were very old-school, classically driven. In terms of just flavor, it was not what I was looking for. In terms of preparation, I read up a lot, I tasted a lot, I cooked a lot more. I cooked at home. It’s nothing like what you learn to do for 300 people a night, how to get things fast and still good at the same time. It’s a lot and I’m still learning. In a restaurant, there are a few things you are constantly learning. Wine and cooking. When I stop learning about both of those items, that means I’m not going to be in this business anymore.

What about your past restaurant experience? SC: I grew up in a restaurant family in Florida so I was always in a restaurant. When there was no babysitter, you’d go to the restaurant and do some work for your parents and help out.

RC: In terms of this relationship, I’d have to say it’s a classic fit Never even thought about it, but he taught me a lot in the kitchen and I’ve taught him a lot about the business and the front of the house. We’re both learning from each other constantly. There’s always something to grow with. Now he’s learned pretty much everything I know about the front of the house and I’m still learning about the kitchen and cooking. A long way to go. But at least we’re both in the same path. We come up with a flavor or an idea and we both understand it.

How long ago was it that you met? SB: Three almost four years.

RC: We’ve blossomed together. We’ll see where it takes us.

Do you have anything planned beyond the new place at this point or is that plenty for now? RC: Yes, and not telling. Yet.

If you weren’t a chef, what would you be? SC: I don’t know. There was a time I tried to leave the restaurant business. I wanted to be a firefighter for a little while and I pursued that. I wanted to be a veterinarian at one point. I can’t think of anything else I’d rather be doing.

RC: I’m obsessed with underwater, marine biology, fish. If there was a chance to changewhen I was younger, I might have stuck to that path and done a lot of photography work.

If you had to design your perfect day in New York – what would you do? SC: As little as possible! [Laughs] I’d probably walk around, have a few good meals, and go out at night.

RC: Walking around in NY is one of those things that you take for granted. I’ve been here for 9 years; still, walking around, even in a neighborhood you’ve gone over and over is one of the best things. My perfect day is my son and myself going to the park, the zoo, to the fish stores, eat, that’s it. Which I do quite often.