Since opening in early January, Sun Noodle's Ramen Lab outpost has drawn lines of devoted soup slurpers to Kenmare to brave the elements for one of a few coveted spots at the standing bar. On a frosty Friday evening I headed to what I assumed would be a very chilly hour huddled inside the restaurant's small vestibule for space to free up. Luckily for me, showing up solo can mean squeezing in where a larger party wouldn't fit. Such is the additional advantage of not having any chairs or stools.

Dining without a partner also means taking a more appreciative look at the performance unfolding on the other side of the counter. There, chef Jack Nakamura and an apprentice engage in an elegant and nimble dance in the narrow space, deftly handling scalding pots of broth while bending to make room for the other to pass. Once an order is placed, the choreography begins, timed so that each element—from noodle to broth to topping—is prepared for climax at precisely the right moment.

For the Torigara Shoyu Ramen ($13)—one of two ramen options currently on the menu—that means a golden stock made from chicken and even more chicken flavor from the addition of chicken fat, which gives the soup a beautiful gleam. On top, wisps of green onion, crunchy spinach, bamboo shoots, fish cake and sheet of nori, plus a slice of pork chashu that's as much tender, flavorful fat as it is flesh. 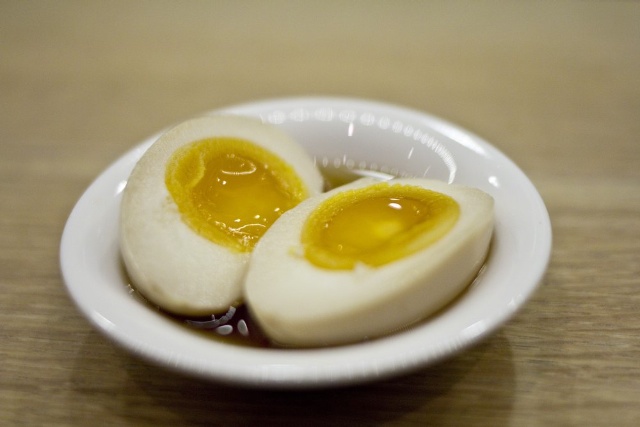 Sipping spoonfuls of the broth made the case for ramen as a partner with grandma's chicken soup for a pesky head cold. The schmaltz sticks to your lips just a touch—a reminder of the meal's caloric bounty—as you greedily slurp the noodles. As a company that provides noodles to some of the biggest names in ramen, the carbohydrate component isn't an afterthought here. The thin, wavy noodles are toothsome and stand up to the chicken onslaught, absorbing just a touch of the broth as they make their way into your mouth.

Unlike some other rote ramen shops, there isn't a long list of additions to fortify your soup. You can supplement either one with more pork or, as I did, opt for the soft poached egg, which has been steeped in a marinade of soy sauce, water and bonito. Oftentimes an afterthought at shops of lesser renown, the egg here may be one of the best I've had...anywhere. Whether eaten cold on the side—as it's served, so as not to affect the flavor of the broth—or gingerly dunked into a warming broth bath, it's the platonic ideal of a boiled egg, all comfort and simplicity.

For now, there are just the shoyo and a vegetarian XO Miso Ramen ($14) on the menu, but the apprentice told us that they're adding new soups in about two weeks. Hopefully, this means their promised ramen flights are going to be debuting, though they were mum on what exactly the newcomers would be. For now, head to Nolita—alone, perhaps—to take in a culinary show and slurp one of the best new bowls in the city.