Shigemi Kawahara, who’s known in Japan as the Ramen King, unveiled the much anticipated Ippudo last night at a press event packed with food bloggers and dozens of members of the Japanese media. The East Village ramenya is his company's first restaurant outside japan.

With the last chill of winter hanging in the air, it was a perfect night for slurping noodles and hot broth. And oh, what noodles they were: The thin strands had just the right balance of springiness and softness and were impeccably fresh, since they’re made daily. For fun you can watch the noodle-making process through a tiny window in the hallway outside the loo in Ippudo’s basement. 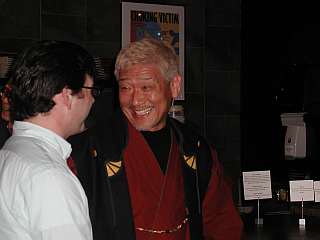 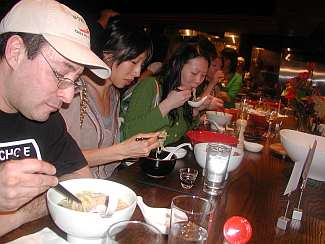 It was somewhat of a letdown that Kawahara’s signature dish, The Ramen King, a pork-based creation containing a cube of gelatinous foam that changes the flavor of the soup as it dissolves, wasn’t served. Nonetheless the two ramens showcased were both delicious and offered contrasting interpretations of this classic Japanese comfort food. The Shiromaru Classic, surely one of city’s best tonkatsu ramens, wasn’t overloaded with too many ingredients, just some thin slices of Berkshire pork and veggies. The secret to the milky broth’s subtle flavor lies in boiling pork bones for 18 hours and reducing the stock three times, while reserving a bit of the broth from each step, and then reincorporating the reserved broths with the ultraconcentrated result of the third reduction.

The red Akamaru Modern had a lot more going on, with huge chunks of pork floating in a red broth seasoned with garlic oil. It’s clearly the favorite of the restaurant’s younger employees, who will have to learn to share when Ippudo opens to the public March 31.

#east village
#ippudo
#ramen
#Shigemi Kawahara
Do you know the scoop? Comment below or Send us a Tip