"I wanted it to look mysterious," Keizo Shimamoto says while standing outside the nondescript storefront of his new (well, sort of, we'll get to that) ramen shop opening today on 40th Avenue in Long Island City. There's a small sign next to the door that reads either "getting ready" or "open," but if you don't read Japanese, just look for the lantern, which'll be lit when this new iteration of Ramen Shack is ready to welcome diners.

In comparison to the austere exterior, the inside is bright and cheery, and will be busy with Shimamoto and his staff bustling around creating the stocks, tare and toppings that'll be part of the seven or so bowls on offer each day. The space originally served (and still does) as a commissary kitchen for the many arms of Shimamoto's business, which include the Ramen Burger, ramen pop-ups, and a retail business that supplies ramen ingredients to a few NYC restaurants. Perching at some of the space's 10 seats, you'll have a widescreen view of everything going on behind the scenes.

The idea for a restaurant came out of necessity: there was no place large enough to store the structure that served as the facade of the Ramen Shack pop-ups at Smorgasburg. But it dawned on Shimamoto that this would be the perfect way to showcase his proprietary ramen and burgers in an underutilized front office of the kitchen. "Even if nobody comes to eat, I'll be prepping and thinking of new stuff." Given that Ramen Burger still draws a line, I find that unlikely.

This is Shimamoto's first brick-and-mortar in which he's a sole proprietor; he helped open Ramen Co, which has since shuttered, in the Financial District. He'll serve six or seven bowls of ramen—with some "secret" day-of menu additions, possibly—plus wontons and his full roster of Ramen Burgers. 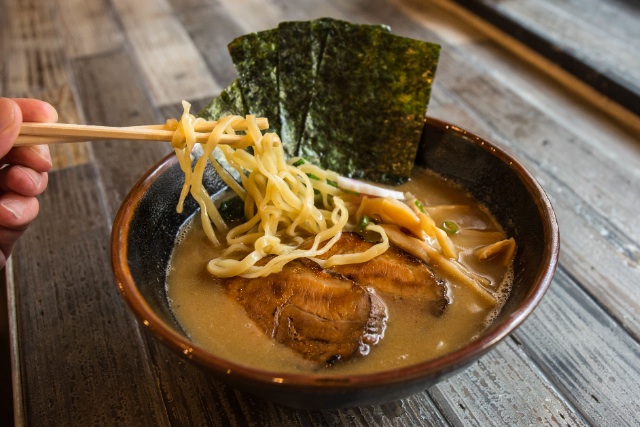 There'll be traditional shio, shoyu and tonkotsu bowls on offer, but the focus, for opening at least, are two new creations: the Truffle Shio—made with Sabatino Tartufi white truffle-infused olive oil—and the "Quiet Storm," named after rap group Mobb Deep, the duo whose member Havoc grew up in the adjacent Queensbridge Houses.

Shimamoto's particularly excited about the latter, which he created using the soup from a tsukemen—a dipping-style ramen—that he crafted earlier this year blended with dashi to turn it into this new ramen. The original stock has 13 different ingredients, a rich combination of chicken, pork, seafood and other umami-rich components. It's deep and unctuous—topped with some of the best chashu pork this blogger has ever tried—with flat noodles courtesy of Sun Noodles ready to be slurped up. Shimamoto says his goal, eventually, will be to make his own noodles.

Ramen Shack will only be open from 11 a.m. to 7 p.m. for now and only on Tuesdays through Fridays, but there's the possibility of staying open later if there's demand. And don't expect that your destination bowl of soup will be on the menu when you show up. "This is the next step for me. Three years of good and bad decisions have brought me back to what I wanted to do originally," Shimamoto says. "This is my lab where I can change styles whenever I want." 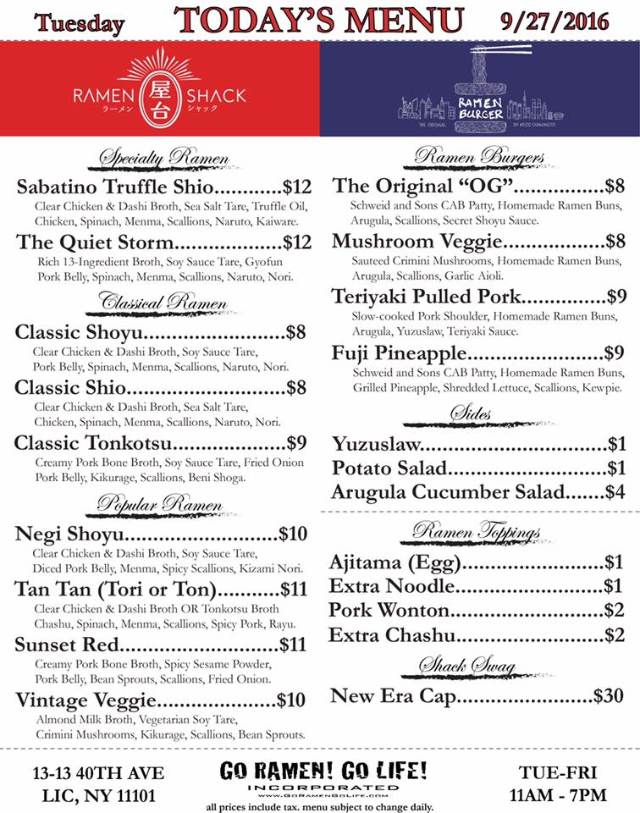