After two years, Ramen Burger still draws the most persistent lines at Smorgasburg, even with other outlets like Berg'n selling the popular food mashup. But that doesn't mean creator Keizo Shimamoto is content to rest on his laurels; in fact, since he debuted the polarizing burger, he's gone on to open a ramen restaurant in the Financial District—he's since reduced his role to consultant—and now he's turned his eye to the forthcoming Queens Smorgasburg, where he'll be debuting a yatai, a food shack serving ramen.

"Ramen Shack will be a way for me to showcase all the things I've learned about ramen over the years after quitting my job in finance and living the ramen dream in Japan," Shimamoto told us. "I'm trying to make it an actual sit-down booth like the 'shacks' you see on the streets of Japan and I am aiming to only serve people who sit at the shack. I would like customers to enjoy ramen just like they can do in Japan."

Shimamoto plans to showcase a new style of ramen each week, beginning with an "old school Tokyo-style shoyu ramen" and going from there. "I think Americans often overlook the delicateness of a pure traditional bowl of ramen and I want to remind them how a simple bowl can also be a powerful bowl." He also says he'll offer a cold ramen at some point.

The Queens Smorgasburg, which debuts Saturday, July 11th at 11 a.m., features both an outdoor and indoor space. You'll find Shimamoto manning his yatai indoors in a 10 X 10 space featuring a few stools for slurpers. For now, he'll just be there on Saturdays when the Smorg comes to LIC, but leaves open the possibility for expansion if things go in that direction. 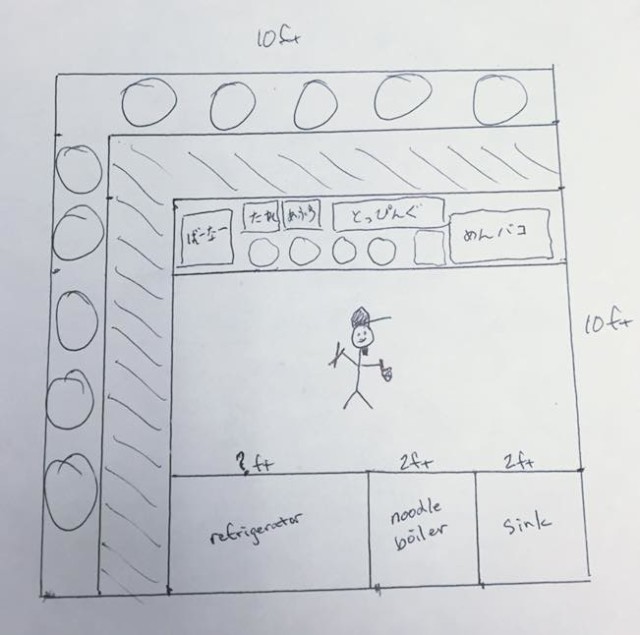 #keizo shimamoto
#queens
#ramen burger
#Ramen Shack
#smorgasburg
#original
Do you know the scoop? Comment below or Send us a Tip