Earlier this week, rabbit lovers took to Union Square to protest Whole Foods' launch of a rabbit-meat pilot program. Despite providing a highly detailed report on the store's rabbit welfare standards, many people are still enraged that an animal most commonly perceived as a pet could ever be served on a dinner plate in any civilized American household.

The Atlantic dedicated an impeccably-sourced think piece to the topic, but because we have the collective attention span of a doorknob, here are the salient points:

Rabbits are easy to raise and butcher in your backyard, they’re light on the environment—producing six pounds of rabbit meat requires the same amount of food and water as it takes to produce one pound of cow meat—and their meat is lean and low in cholesterol. The biggest drawback of rabbit meat has traditionally been the struggle to find it in stores, a point Modern Farmer writer Karin Pinchin makes in an article that ponders whether rabbit is the new "super meat." With Whole Foods taking on the role of supplier, this might not be a problem anymore.

On the other hand:

But Margo DeMello, a professor of cultural anthropology at Canisius College, is convinced grocery stores shouldn't sell rabbit meat. DeMello, who is the president of the House Rabbit Society and a co-author of the book Stories Rabbits Tell, says it's a problem that stores carry the meat of “an animal that has been embraced as a pet in millions of American households.” Sure, Whole Foods’s decision was a response to demand, she says, but they're only going to end up creating more of it by putting it in their stores.

The article dedicates the remaining two pages to a discussion of the ethical hazards of eating a rabbit, an argument that boils down to the notion that we would never eat dogs or cats, because they are pets and eating one would therefore be akin to braising and serving a neighbor or longtime family accountant.

Would you eat a rabbit? Gothamist Associate Editor Ben Yakas points to this video as his response:

Touche! Remember back in 2008, when PETA attempted to rebrand fish as "sea kittens"? Their point was a good one: People are OK with eating fish because they're distinctly unadorable, their merits as living creatures tied to their uggo faces and slimy bodies. It's not totally dissimilar to the way a prospective job candidate's qualifications are associated with their straight white teeth and robust head of healthy Presidential Hair. In this world, looks matter, and that bias applies to humans as well as animals.

Of course, most carnivores are able to live with themselves only by never looking into the sweet, gentle gaze of their future bacon, or listening to the soothing lowing of a fur-covered pre-brisket.

What else do we know? On the stock image website Shutterstock, a search for "rabbit food" results in both images of assorted floppy bunnies gathering around a feed bowl, as well as a dank looking rabbit meat dish "baked with tomatoes, potatoes, rosemary and olives." At Glasserie in Greenpoint, Chef Sara Kramer manages to kill two Easter animals with one stone, glazing her rabbit in duck fat. At $76 a plate, though, there's no immediate threat of rabbit becoming the Next Chicken.

And finally, it's important to remember that "pet" is in the eye of the petholder. Didn't we learn just this morning what wonderful companions pigs make? On the other hand: 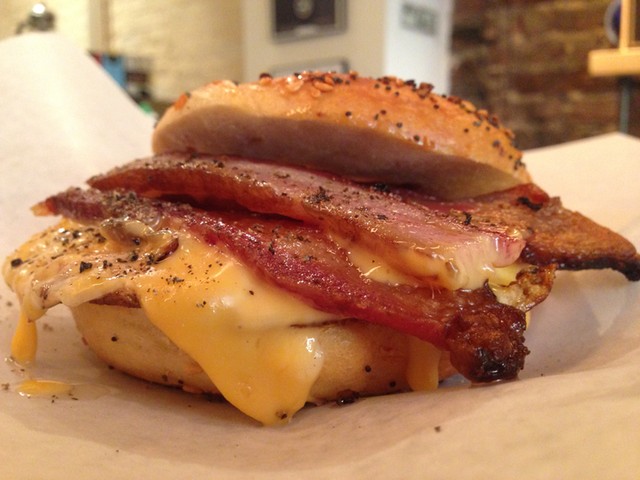 The question is ripe for debate. Go ahead and rip each other's eyeballs out in the comments below!

#peta
#rabbits
#veganism
Do you know the scoop? Comment below or Send us a Tip