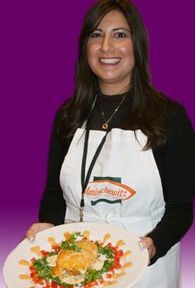 Far Rockaway, Queens--REPRESENT! Resident Joy Devor won the Simply Manishchewitz Cook-Off last night with her recipe for "Fantastic Flounder Rolls" beating out close to 3,000 other entrants in this nationwide competition.

Somehow Ms. Devor managed to score some elusive Tam Tams, which might have been the key to setting her recipe above the rest. (The recipe also used Manischewitz Extra Virgin Olive Oil.) Her next cooking challenge, according to NY1, is "preparing food for her family's Passover Seder on Saturday night."

Seder recipes, desserts in particular, can often be a challenge since traditional baking ingredients can't be used. Well never fear, as Josh at the Food Section and Deb of Smitten Kitchen have wrapped up some delectable Passover-friendly dessert recipes including Le Pain Quotidien's flourless Belgian Brownies, François Payard’s Flourless Chocolate-Walnut Cookies, Chocolate Caramelized Matzo Crunch from David Leibowitz and a Four-Ingredient Cheescake. You won't even miss the flour.

#cook off
#cooking
#desserts
#Manishchewitz
#passover
#queens
Do you know the scoop? Comment below or Send us a Tip