The Queens International Night Market, now in its fifth season at Flushing Meadow Corona Park, has been a massive success, giving space to more than 300 small businesses, selling food from over 90 different countries, and feeding at least a million hungry visitors over the years.

It's not terribly surprising that the market's weekday spin-off, called Outpost, at Rockefeller Center has also proven to be popular, attracting both Midtown workers and tourists alike. Outpost, which opened in July for a three week-run, has been so well-received that the powers that be at Rock Center have extended Outpost at least through September.

If you haven't been, here's everything you need to know.

There are nine different vendors here, with at least two new additions rotating into the mix after Labor Day: Treat Yourself, grilling up platters of first-rate Jamaican Jerk Chicken (get the "Disrespectful" sauce if you're feeling adventurous), and Joey Bats with those delicious custard tarts from Portugal, Pastéis de Nata. Brooklyn Dumpling has an array of good perogies, but don't sleep on their kielbasa with griddled sauerkraut. The Queens hit Burmese Bites is here as well, with their made-to-order flatbread stuffed with chicken, onion, and egg, called Keema Palata. And Taquitos al Pastor will be around through September too, carving up their juicy, crisp-fried bits of pork for Tacos al Pastor. 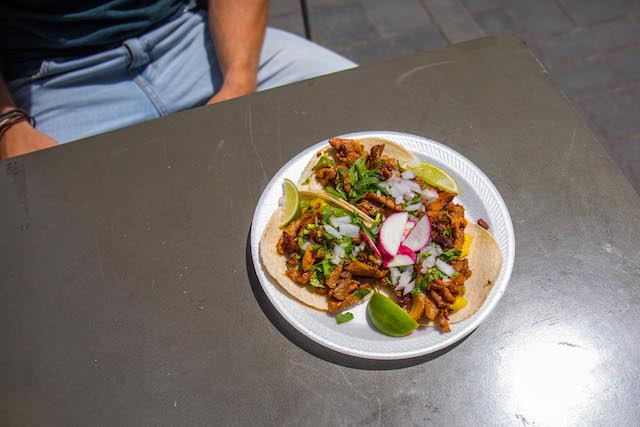 Outpost is located in the plaza to the south of Prometheus and the skating rink, near 49th Street. There are only about 20 tables set up between the rink and the mini-village of vendors, but turnover's pretty quick.

While out-of-towners are present, it's mostly area workers bringing food back to the office, and the lines are manageable. Several vendors told me that the evening scene is even more relaxed, and this seems like an excellent, inexpensive dinner option for the neighborhood.

The Queens Night Market is known for keeping prices low (everything is either five or six bucks, to encourage sampling across many vendors), but because Outpost is serving more meal-sized portions, some dishes creep up into the mid-teens. It's all still pretty inexpensive though, especially considering the quality of food.