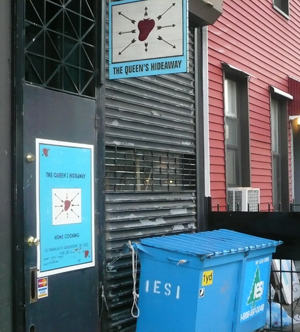 For the record, The Queen's Hideaway has closed, following a reportedly raucous closing party Saturday night. Opened about four years ago, the seasonally-minded restaurant put an isolated little corner of Franklin Street in Greenpoint on the dining map, becoming kind of a big deal after a slam dunk review in the Times in 2005.

Chef and owner Liza Queen took a break from dismantling her restaurant yesterday to tell us she has no idea what's going to happen to the place: "That's up to my prick of a landlord," who raised the rent "astronomically." Queen says she's talking to people about chef gigs in Manhattan, but nothing is "set enough to be able to say." She says most locals (but not all of them) seem sad to see her go:

"People have been very sweet and sad about it. I think we're the last of those kind of vaguely scruffy places, you know what I mean? I don't know if you've seen T.B.D. [Ed.:The big, slick bar next door].

"Some people, I think, also feel fairly vindicated, so there's that too. I made the mistake of looking at some blog stuff and I shouldn't have done that. And I'd say the reality of it is that we were kind of too expensive for this neighborhood as it evolved. So now I think some people are like, 'See, we told you it was too expensive!' I am definitely a little heartbroken but I do think ultimately something good is going to come out of it and I will be taking over another kitchen probably at least within the next year."

In the meantime, Franklin Street desperately needs a Duane Reade!

#closed
#closing
#greenpoint
#liza queen
#queens hideaway
Do you know the scoop? Comment below or Send us a Tip
A new Gothamist is coming! We’ve moved comments over to our beta site. Click here to join the conversation and get a preview of our new website.