A new supper club launching this week aims to highlight the diverse and delicious dining landscape of Queens, beginning with a family-style meal devoted to the fusion of Indian and Chinese cuisines. Joe DiStefano and Jonathan Forgash—both champions of the borough—begin the Queens Dinner Club on Thursday at Tangra Masala, a Sunnyside restaurant operated by Calcutta-born Chef Peter Lo. Lo will be preparing a multi-course meal at his restaurant, a former Romanian steakhouse that still bears the golden columns and gilded disco decor of its previous life.

"What made Chef Lo an ideal starting point is that he reflects the diversity of Queens itself in his cooking. Also Indian-Chinese is not a cuisine everybody's tried so we wanted to introduce people to it," DiStefano explains. "Back when he opened his restaurant most of his customers were Indian. These days his wait staff and a good portion of his customers are Nepalese because they also have an affinity for the spicy flavors of one of the world's true fusion cuisines." 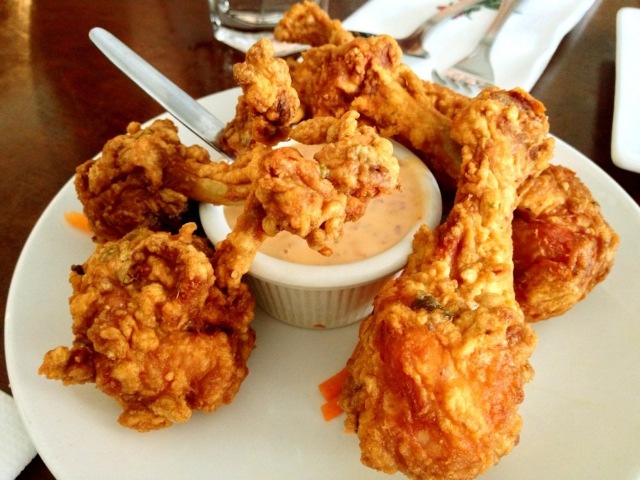 Lo's plan for the evening will be to serve some classic Indian-Chinese dishes like the Chili Chicken—dry-fried with onions and spices—and one of the chef's interpretations of a chow mein, here a Singapore-style with curry. Other highlights include the restaurant's popular Lollypop Chicken, seen above, as well as Tangra Masala Fish Finger, Beef Tangra Style and Fish with Hot Garlic Sauce.

DiStefano and Forgash are making the Queens Dinner Club a monthly event, held at either restaurants or "unique venues" throughout the borough. DiStefano wouldn't give out specifics just yet, but says that "Georgian, brews and BBQ" are on the horizon, as well as "several top secret unusual venues." Tickets for the Indian-Chinese Fusion Feast are $40 for 10 dishes including soft drinks (no alcohol).