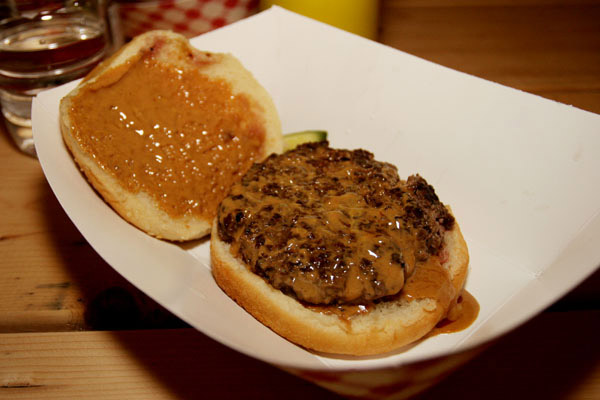 After the success of our Gothamist-A Hamburger Today QBQ BBQ last year (that's quality before quantity), we've decided to team up with Serious Eats/A Hamburger Today for another burger event at Water Taxi Beach in Long Island City. At last year's event, Chef Harry Hawk served up four regional burgers from around the nation. This year, you get to choose what burgers are served, with the top three vote-getters across Gothamist, Serious Eats, and A Hamburger Today making the menu.

First, the nitty-gritty details of the event:
Date: Saturday, July 28
Time: 5 p.m.
Place: Water Taxi Beach (map)
Cost: $13.50 for 3 burgers
Payment: Tickets are available through TicketWeb
Important Details: Please be sure to bring your ID when you come; no one is permitted on the beach without an ID or an of-age legal guardian.
Getting There: Water Taxis depart from E. 34th Street in midtown Manhattan on a varied schedule (visit nywatertaxi.com). Subway riders should take the No. 7 train to Vernon Avenue/Jackson. Walk along Vernon Avenue to Borden Avenue, turn right. Look for signs for Water Taxi Beach. For more travel options, visit the beach's site.

Instead of four burgers, we're serving up 3 burgers this year. What burgers will they be? Here's the list that you get to vote from:

The Onion Burger: Popular in El Reno, Oklahoma, the Onion Burger was born of frugality. Throw a half an onion on the griddle, add to that a ball of ground beef, and smash it all together with the back of a spatula. You've essentially extended your meat by mixing in onions. The onions caramelize as they cook embedded in the beef, giving you a sweet, crusty oniony patty.

The Pimento Burger:Pimento cheese is big across the South, usually as a spread eaten on celery stalks or as a filling between two pieces of white bread. But in Columbia, South Carolina, they use it as both cheese and condiment on the burgers. Pimento cheese, for all you Yankees here in New York City, is a mixture of grated cheddar, chopped pimento, mayo, hot sauce, and black pepper. (Horseradish, mustard, and Worcestershire sauce are three common options.)

The Guber Burger: We served this one at last year's bash, and it seemed to be a hit, so we're putting it on the ballot in 2007. Made locally famous by The Wheel Inn in Sedalia, Missouri, the guber burger features a heaping dollop of peanut butter applied to the burger right as the hot patty comes off the griddle.

The Nut Burger: George Motz discovered this candidate in while researching his upcoming burger book. It was, he said, "like eating sundae topping on a burger. It's coarsely ground peanuts mixed with mayo, topping a burger. It's great!"

The Butter Burger: A regional delight originating in -- where else? -- Wisconsin, the Butter Burger takes a very liberal dosing of butter after coming off the griddle. Those of you who have visited the Midwest recently may have had one at the rapidly expanding Culver's chain, where it's a specialty.

The Hammmburger: A burger topped with Jubilat Polish slab bacon‚ essentially Canadian ham, hence the extra mmmeaty name of this burger. This one is the creation of Water Taxi Beach's Harry Hawk.

Vote now for what you think should be on the menu. Voting closes on Friday, July 20th at 6 p.m. To keep it fair, one vote per person.

Special thanks to Six Apart, who have donated a keg of Orlio Common Ale for sponsoring the event.

Purchase your tickets to the event now! $13.50 for three burgers (you can mix and match your burger choices).