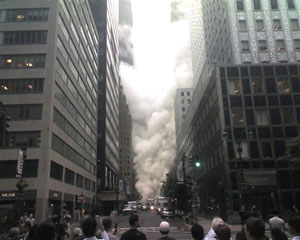 Tomorrow marks the first anniversary of that horrible steam pipe explosion in midtown that left one woman dead and others seriously injured. And Public House on 41st Street has some theme drink specials tonight to commemorate the occasion. We're talking $8 Car Bombs, $6 PipeBomb Drinks, and a “Taste Bud Explosion Platter” with wings, nachos and calamari. This is going to be the best steam pipe explosion anniversary party in town!

Or, rather, it was; apparently some people thought the explosion theme was in poor taste. Reached by phone, a Public House employee told us they got a very negative response to their first email announcing the specials, adding that “some people are very sensitive” and qualifying that "this wasn’t meant to be a celebration but a remembrance.” Instead of the drink specials there will be an open bar from 8 p.m. to 9 p.m. But no celebrating! After the jump, read the full apology email that Public House fired off in response to the complaints, as forwarded to us from a tipster.

To Whom It May Concern:

Public House would like to apologize for the possibly inappropriate names of our drink and food specials referring to the steampipe explosion. We were directly affected by this incident and we merely wanted to thank all of our loyal clientele for standing by us through such a hard time. We also wanted to honor and remember the people who were injured and who lost their lives. BY NO MEANS has this matter been taken lightly. Our intention was not to capitalize on a day that horrified people; it was intended to say Thank You to everyone who was here with us when it happened. We all stuck together as a united force to get through that day and we never wanted to offend anyone.

We apologize profusely for the lack of thought behind the names of our food and drink specials and we hope that you understand and forgive us for this miscommunication.

#apology
#car bomb
#drink specials
#drinks
#Public House
#restaurant
#steam pipe
Do you know the scoop? Comment below or Send us a Tip