"Chipotle, shame on you! Farm workers deserve rights too!" chanted protesters outside the Union Square Chipotle at Broadway and 17th yesterday, forming a picket line crossed only by the hungry and indifferent. The gathered picketers, members of the Community/Farmworker Alliance (CFA) and Coalition of Immokalee Workers (CIW), were participating in a national day of action asking Chipotle to stand up for farm workers' rights in the Florida tomato growing industry. This nationwide protest was a major move in a larger campaign against Chipotle that has been going on for some time.

The CIW is well-known for its Fair Food Program, which helps ensure workers' rights and includes a one-cent-per-pound salary increase for tomato pickers, and has already been signed by Taco Bell, Burger King and Chipotle's former parent McDonald's. The organization has been trying to get Chipotle to sign on for six years, according to CFA member Mae Singerman. "They bill themselves as sustainable and local and organic," she said, "[But] they refuse to sign a fair food agreement." 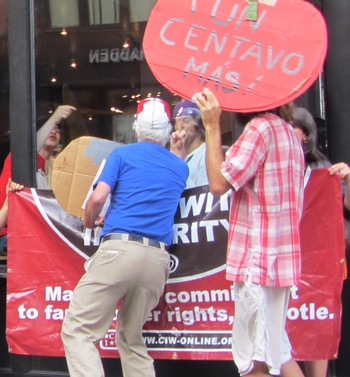 Oscar Otzoy, a 28-year-old Immokalee, Florida farm worker, came to New York for the protest. He described working 10 to 12 hours a day in dangerous heat, earning as little as 15 cents for picking a 23-pound bucket of tomatoes. The workers got no medical benefits, vacation time or holidays off. "With [the Fair Food Program], we have achieved changes," Otzoy said. "We want Chipotle to listen to the voice of the workers."

However, Chipotle argues that for three years they have in fact given farm workers the bonus they want, and, obviously, the company says it does not support worker abuse. "We have only worked with tomato growers in Florida who have signed onto this Fair Food Agreement, which creates the same effect as if we had signed," Chris Arnold, Chipotle's communications director, told us. "All the results are there."

He characterized Chipotle as different from standard fast-food chains, with fair practices being their standard. The tomato providers Chipotle uses can be audited by the CIW, so Anderson feels that their targeting for protest makes little sense. "We don't believe that you have to have agreements like this to do the right thing," Arnold said. "That's not how our business runs and it never has been... At a certain point it begs the question about [CIW and CFA's] motives."[Editor's note: We look forward to reading your pedantic remarks on the misuse of "beg the question" in the comments!]

The CIW is unique for being a worker-led advocacy group, according to Adam Obernauer, 25, who has worked with the partner organization CFA since he was in high school. It is also unique for its success rate, having signed Trader Joe's over to their cause using similar tactics less than six months ago. "Most activists are so used to losing," Obernauer said. "We know that we're going to beat Chipotle, it's just a matter of time."

Despite Chipotle's confidence that their practices are fair, Singerman said signing the agreement would ensure they uphold these claims, and she sees no reason for them not to. Until Chipotle agrees, CIW and CFA promise to keep publicly shaming the company.

But yesterday customers continued to stream past the chanting, sign-wielding protesters and into the restaurant. "I think it's unfortunate that people don't get paid what they want," one diner, Tim, told us. "[But] I felt like I was hungry and I know they make a damn good burrito and the price is reasonable."