Midtown's ubiquitous sandwich shop Pret A Manger is the target of a new class action lawsuit accusing the company of tricking customers into "paying for air" through a deceptive turkey wrap bait-and-switch.

On Monday, customer Yee Ting Lau filed a suit against the company for "deceptive practices [that] portray the Greek Goddess Turkey Wrap package," among other wraps, "as having more contents that it actually does." The shroud of deception, according to the suit, is a seemingly harmless cardboard casing—"lovingly handmade throughout the day," it reads—positioned in a way that obscures the actual size of the packaged wrap.

As a result, the suit alleges that patrons of the chain are forced to consume a "considerable" amount of air, anywhere between 1.25 and 2.5 inches of it, depending on the particulars of the wrap.

Lau first realized something was amiss back in June, when she purchased a vegan Chakalaka Wrap from a Pret on East 39th Street and Madison Avenue. But instead of receiving the expected nine inches of squash-based goodness, she only received eight! 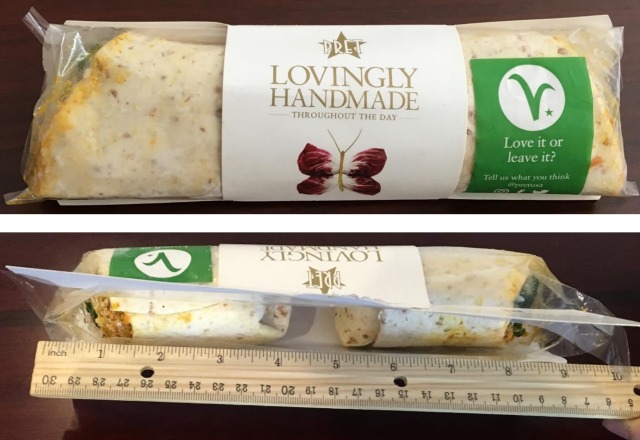 The cost of such deception exceeds $5.5 million dollars, according to the suit, which the company may be liable to pay under New York's Deceptive and Unfair Trade Practices Act, false advertising law, and common-law fraud.

Stopped for a comment on his way into the Pret on 52nd and 7th, local sandwich enthusiast Jake Dobkin said "this is why you don’t order wraps, which are an abomination created by the sandwich cartel to cheat customers out of bread; personally I see every baguette I eat as a blow against the establishment."

Similar "slack fill" lawsuits have ballooned in recent years, the New York Law Journal reports, with New York's Eastern and Southern Districts seeing a particular surge in filings—which is maybe a strong argument for tort reform, though keep in mind that without heroes like Lau, we'd still be eating an 11 inch Subway Footlong.

Representatives of Pret A Manger did not respond to a request for comment.

#lawsuit
#midtown
#pret a manger
#sandwich
#wrap
#original
Do you know the scoop? Comment below or Send us a Tip