Last night, the Post's Steve Cuozzo, in a brave act of investigative journalism, dove deep into enemy territory to assess the food situation at Occupy Wall Street. And oh, was the resulting review a gem. 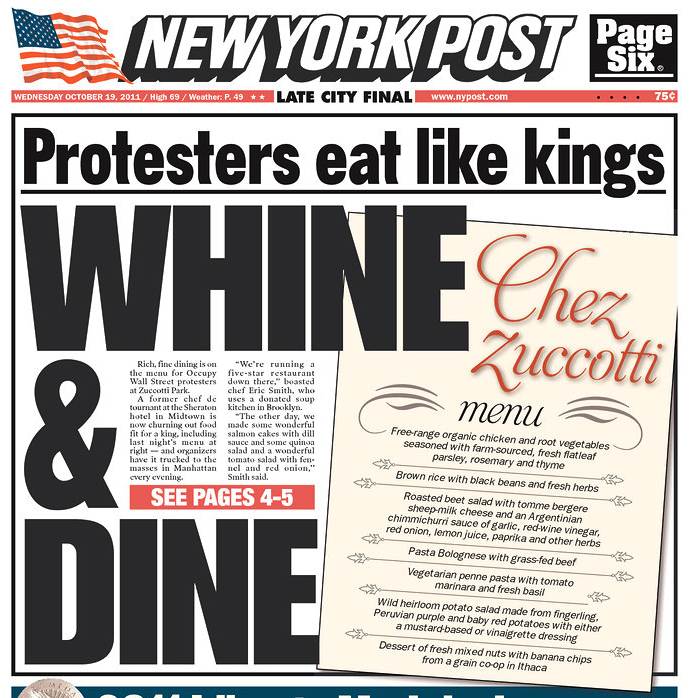 First, The Cuozz mocks the protesters for eating meals prepared by a professional chef in a soup kitchen in East New York, "a poor, crime-ridden Brooklyn neighborhood that has nearly no restaurants at all." (You may recall that protesters were looking for a commercial kitchen last week.) Then he takes on the food—the Post even printed the menu on the front page—criticizing the "thin, feeble" organic chicken and root vegetable soup, the spaghetti bolognese with "grass-fed beef so tough the beasts must have swallowed stones, too," and the co-op donated nuts and banana chips for dessert. "You wouldn’t expect anti-capitalism cranks to gorge on truffle panna cotta!" Certainly not—they prefer the rarefied pleasures of banana bread pudding.

Interestingly, the Post published a different article shortly before The Cuozz's review, in which writer Rebecca Rosenberg mocks the "smelly" protesters for "eating like kings." Did she miss the memo on the feeble chicken soup? Sheesh. Post writers, if you keep referring to OWS as a "five-star restaurant," you'll only encourage good taxpaying Americans who enjoy the virtues of fine dining to venture on down. And then you'll have a foodie revolution on your hands—the most annoying kind of revolution possible.