Their motto is "Death To False Pizza"—that's how you know Sizzle Pie doesn't fuck around.

The Portland-born pizzeria moves into Williamsburg next Monday, transforming the former Grandma Rose's pizzeria into a pie slinging joint that'd send most grannies running to the hills.

"There was a zine in the '80s called Death To False Metal; very short lived, very small thing, but very impactful to the music scene. It was one of the first times there was a metal zine," explains Sizzle Pie owner Mikey McKennedy. "It's really just something stupid that I said one night and my business partner was like, 'Dude—that's it!'"

Oregonians know Sizzle Pie as much for its rockin' pizza as they do its metal-minded aesthetic. "A lot of the stuff that comprises our brand that people will point to as these decisions we made were just extensions of our personality at the beginning," McKennedy admits. "We just weren't that talented or smart to really think of a 'brand idea.'"

Be that as it may, the restaurants are known for supporting artists through regular shows, and McKennedy's responsible for the artwork that adorns the walls of his restaurants. They're also infusing their pizza and their Instagram page with metal, movie memes, and inside jokes. 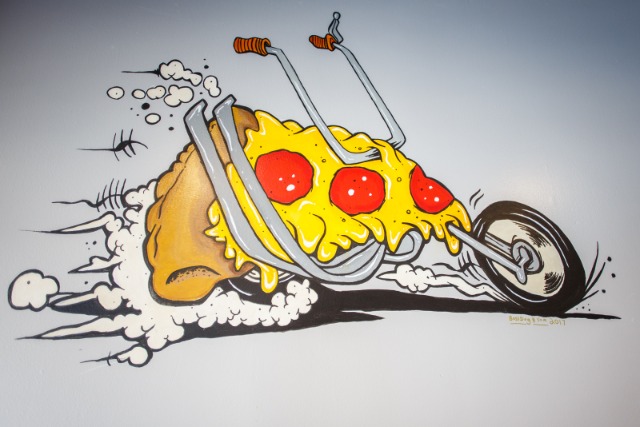 "All the menu items that I name are usually kind of sarcastic, to say the least, or witty, or band references," McKennedy says. "It's usually stuff that I think is so dumb sounding it's funny and makes me chuckle and it goes from there."

"Our meat-eating population is diehard," McKennedy says, but the pizzeria's a well-known vegan destination (McKennedy himself is now vegan) even in places like Portland where almost everywhere offers vegan foods. "It's just something we did. A lot of people from the beginning were like, 'You're gonna lose your asses on money and food costs' and we just said, 'I don't think so.' It is more expensive, but the return is we make good vegan food."

Their vegan ranch for the salads has even become one of their most popular menu items. 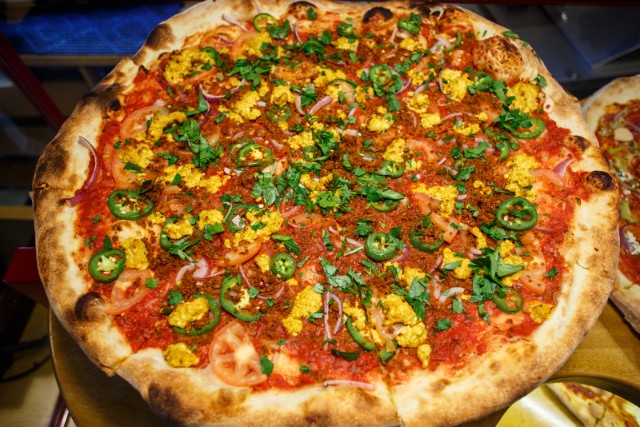 Whether or not they make quality vegan food will be moot to most New Yorkers if the pizza itself doesn't live up to the city's exacting standards.

Sizzle cooks their pizzas in a gas oven, but McKennedy keeps mum on the flour they're using, letting slip only that it's a local equivalent to what they're using in the Northwest. McKennedy says he modeled his pies after the ones coming out of Brooklyn in both the crust and the sauce styles.

"But we're sensitive to saying that because you see crazy shit on the west coast that you don't see on the east coast. Then they're like, "New York-style pizza!' and you're like, 'No, that's not, that's not.' McKennedy laughs. "We like to say we're east-meets-west."

Sizzle Pie's dropping this first location in Williamsburg, followed by another on the neighborhood's southside and a third location in Bushwick, so they're already banking on finding some love in NYC.

"We haven't had any discussions like, "Okay, what're we gonna do to impress New York?' We know our food is good," McKennedy states. "We are going to be very humble and just try to appreciate the fact that we're in this amazing neighborhood and that's the thing. We're gonna go in here, do what we do, and just kinda be quiet and try not to come across like assholes."