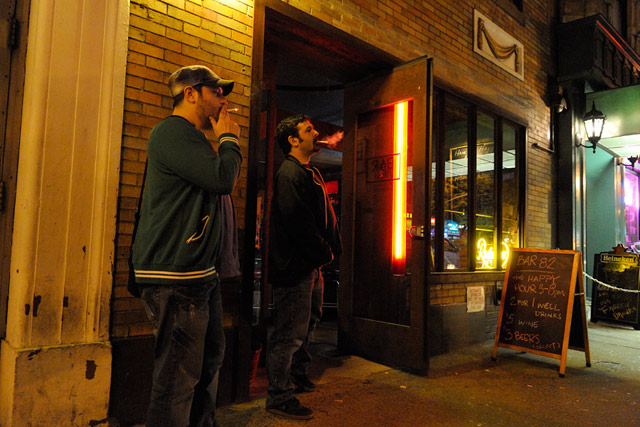 The health department says the number of violations for smoking inside bars and restaurants jumped by a third in the past year, following an increase in inspectors conducting checks as late as 4 a.m., when barkeeps are more inclined to let drinkers light up. The number of smoking citations issued to bars and restaurants increased to 917 in the fiscal year ending June 30th, 2008, compared to 694 in the previous year. The fines range from $200 to $2,000.

But an article in amNY suggests it isn't just the DOH crackdown that's led to more citations. One anti-smoking scold named Susan Siegel says that bars and restaurants are increasingly blowing off the five-year-old smoking ban: "I go out a lot, and I definitely notice it…all over the place. I hate smoking in bars. I go up to people. It’s the law and I feel like I have a right to say something." On the other hand, a smoker named Mark Benkes, spotted outside a Lower East Side bar, says, "You'll find people doing blow more openly than smoking." Which means Mayor Bloomberg will probably demand a cocaine ban next.

#bars
#new york
#nyc
#poll
#restaurants
#smoking
Do you know the scoop? Comment below or Send us a Tip