Our latest installment of Quick Bites brings us to Chelsea for some overhyped poké.

Prediction: the poké boom is doomed.

This bit of soothsaying isn't prompted by the quality of food I ate last week at the brand new Wisefish Poké in Chelsea, the latest in a sudden eruption of poké shacks on the Big Island (of Manhattan), with more looming on the horizon. To be clear, the poké at Wisefish tastes good, but the poké portions are lacking.

First let's talk about the space itself. The people who work there are friendly and efficient, the small space is comfortable and cute, the whole operation organized and energetic. The young co-owners Drew Crane and Bryan Cowan were all over the place the night we went, chopping scallions, greeting guests, coaching the counter workers, and they should be commended for their on-site skills and the work that went into the business.

There's one communal table filling up this spot, and it, along with the food, all looks very pretty and Snapchat-worthy. But I can't imagine that even the most calorie-conscious among the crowd of 24 year olds here didn't require a second feeding somewhere else that night. The classic Hawaiian dish—it's a salad of sorts, with chunks of raw fish—is simply getting lost in translation here.

Poké, as served by Wisefish, is basically all surface flavorings without a lot of depth or substance. Depending on the size you order (snack, small, or large) you get maybe a dozen or so small cubes of fish. You have your rice (or "zucchini noodles," but unless you want to starve to death please get the rice). You have your... that's it! Everything else—the herb mix, the sweet onion, the jalapeño, the hijiki, the tobiko, the numerous sauces and sprinkles of seeds—exists simply to liven up those first two ingredients.

The Wisefish menu features four House Favorites and, when we went, two additional specials. You can also choose your own adventure, but we stuck with Crane and Cowen's suggested combos.

We enjoyed the West Swell, which comes with ahi tuna (and various flavorings); and the Heat Wave, with its salmon chunks (and various spicier flavorings); and the The Vic special, with albacore tuna (and a slight remix of the same sorts of flavorings). All of these were equally good, the ingredients bright and fresh and lively, the balance among tastes thoughtfully executed, the sauce, whether wasabi avocado cream or citrus ponzu, tying things together rather than overwhelming.

For the life of me though I can't remember the specific experience of eating one dish as opposed to eating another. Not even the fish is particularly distinctive from one bowl to the next. Which is a problem, because I can't crave something that I can't recall. And because it's all kind of the same, getting a bunch of bowls and splitting everything doesn't really add breadth to your meal. It's very superficial, this poke-eating thing, the pleasure fleeting.

By the way, don't buy The Chelsea, which is the vegetarian option and, especially when they forget to include the promised avocado, amounts to a pretty meager $8+ serving of food. Some tofu pieces, a few edamame, a bit of onion and cucumber, served over rice and topped with sauce... it tastes okay, but it feels like a rip-off.

Also on the menu are three small, non-poké dishes, and our (fake) Crab Salad was skillfully prepared and devoured in seconds, but also resided in the same basic flavor and texture family as everything else on the table, and so didn't provide the proper punch of a hard-working sidekick. 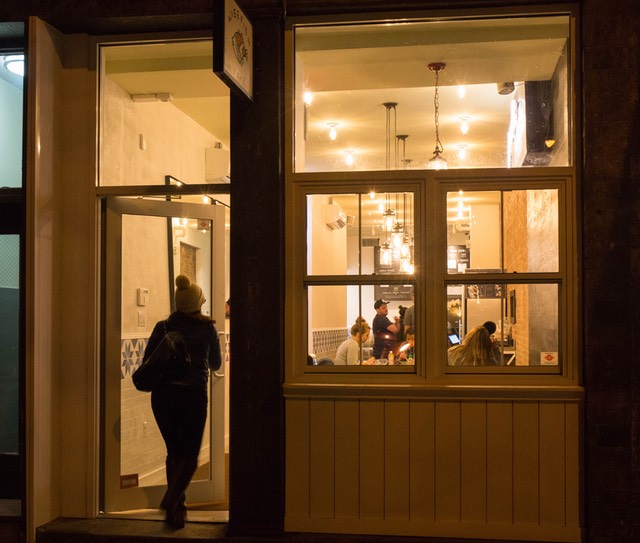 Was that supposed to be my dinner? Because I sure was hungry when I left. Or was it more of a bar snack? That cost $50? Without the bar part? (This was for five bowls, split between two people.)

If you want to see what the poké hype is all about, or if you're from a more poké place than NYC and want to indulge in a bit of nostalgia, by all means you should go to Wisefish. They are doing a good job. I just can't think of a reason why I'd go back.

#Chelsea
#poke
#quick bites
#the grim eater
#wisefish
#original
Do you know the scoop? Comment below or Send us a Tip