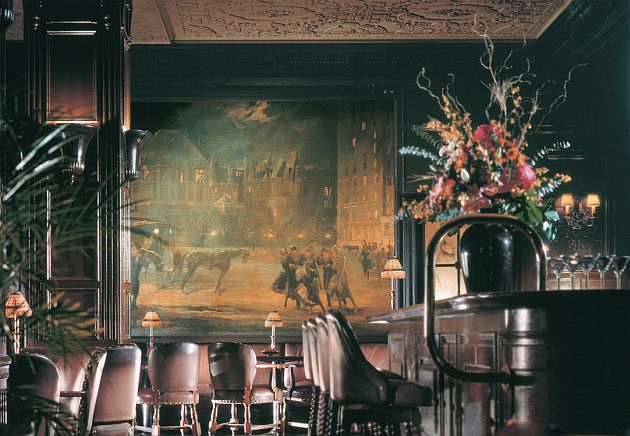 Arthur Emil, the man behind the late Windows on the World and The Rainbow Room, has won the coveted contract to operate the famous Oak Room and Oak Bar (pictured) in the Plaza Hotel, which is near the end of a three-year, $400 million makeover. The 18 story landmark building opened in 1907 and operated as a hotel until 2005, after being sold for $675 million. After delays blamed on “red tape”, the Plaza is expected to open by the end of March as an upscale condominium with retail space and a smaller hotel.

To gain control of the landmark Oak Room and Oak Bar, Emil bested competitors like Peter Glazier, who runs high-end eateries including the Strip House and Michael Jordan's. The Post quotes Glazier cryptically saying he passed on the project “because of environmental concerns.” The Oak Bar was originally a men-only bar and was a favorite of F. Scott Fitzgerald. (The Plaza also has a cameo in The Great Gatsby - and was also seen in North by Northwest) The Oak Room restaurant is famous for its 20-foot ceilings, sable-dyed English oak paneling and frescoes, but not so much for the food, which had declined in recent years.

The hotel's other landmark restaurant, the Palm Court, a favorite among the upper crust for tea and Sunday brunch, will have Didier Virot as its chef when it reopens, according to the Post’s exclusive. Virot will also create a menu for a new champagne bar in the lobby and a lounge overlooking the lobby called the Rose Club.