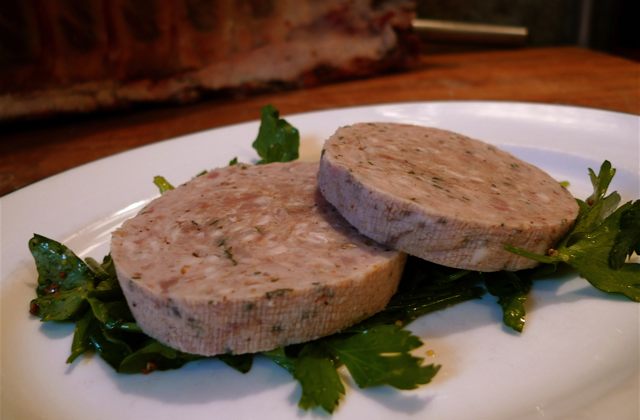 This is a test of the Marlow and Daughters sausage-making capabilities. This is only a test.
Plated is a new feature that delivers the origin story of a dish, as told by an establishment’s chefs and owners. Maybe even once in a while by its dishwashers.

On the plate: Rabbit Sausage, a test drive dish for Marlow and Daughters, the new butcher shop from the owners of Williamsburg's Marlow and Sons and Diner, opening this week.

Tom Mylan: "Originally I made this rabbit sausage for a rabbit choucroute garnie dish at Diner. We also made a mousse with the kidneys and the liver. At Diner, the dish comes with housemade sauerkraut. It's only 15 bucks or so which is really good, considering that it’s super labor intensive. The rabbits are from Quebec, which is about as local as we can get them on a regular basis. The belly, shoulder and loin get ground with cured pork belly—there's hardly any fat on the rabbits—some aromatics, and a little cream-soaked bread. Then we whip it in the Hobart to emulsify it. I can't imagine we're going to be doing this sausage that often, but I think it's an interesting thing and I'm kind of proud of it, especially because it was a big pain in the ass. Deboning rabbits is very tedious. It's like deboning kittens.

"Caroline Fidanza is running Marlow and Daughters and will be ordering the animals. Me and my apprentice Brent are going to be doing the cutting and running the counter—a small show. Nobody has really done this before, so we don't really know what to expect. Hopefully it'll go apeshit and it'll be great. In addition to different cuts of meat, we'll have rillettes, rillons and a rotating cast of sausages, including standard breakfast sausage. We're thinking we'll make different kinds of sausages once a week and when they’re gone, they’re gone. Maybe Wednesday will be sausage day."

The space: Marlow and Daughters’ address—95 Broadway—was most recently a barbershop. The physical location shares a street address with the site of the 19th century baseball club’s hangout. The Brooklyn Eckfords called nearby Union Grounds home field, and were active from 1855 to 1872.

#caroline fidanza
#diner
#duck confit
#marlow and daughters
#Marlow and Sons
#plated
#rabbit sausage
#tom mylan
Do you know the scoop? Comment below or Send us a Tip