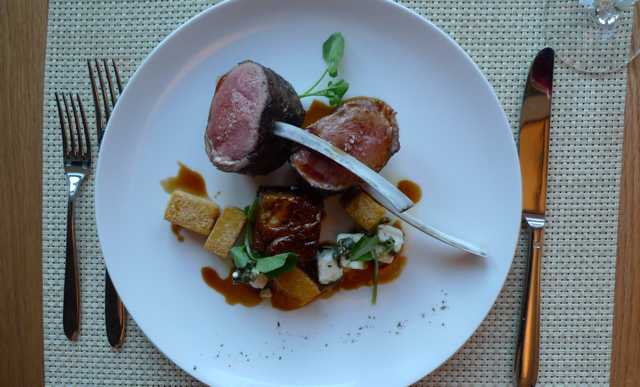 This is Plated, a new feature that delivers the origin story of a dish as told by a restaurant’s owners, chefs, and even once in a while, its dishwashers. Our first plate comes from recently opened 10 Downing.

Stephane Dorian: "The lamb is a reflection of what my partners and I wanted to do food-wise. We were talking about concepts for the restaurant and settled on the concept of seasonal American. A lot of this starts with Alice Waters, and the flavors are often Mediterranean. We built 10 Downing’s kitchen with a grill, and I wanted lamb on the menu. We paired the lamb with panisses, which are like chickpea fries. They’re so good. The kitchen would be in trouble if we offered them as a side dish."

Katy Sparks: "We were in the stages of fine-tuning the dinner menu, and Jason and I were finally willing to give up the menu slot we had initially set aside for pork, which was hard. Then we found this nice, grass-fed Colorado lamb. I made a written list of ingredients I think go well with lamb, like mint, chickpeas, capers, and feta. Jason combined fresh lavender and thyme to crust the lamb. With the lamb itself, he almost makes lollipops with the frenched bones and the meat."

Jason Neroni: "I worked for Ducasse, and we had served this really beautiful tuna and panisse dish. I kind of tweaked the recipe to make it more like a croquette, really silky. The feta is marinated with mint, anchovies, lemon juice, and zest. We carefully braise the fat from the lamb breast to offset the leanness of the chops. Most people tend to tend to throw that part away. There’s a lot of olive oil and a little black cardamom on the plate. There’s also some watercress that adds a light note. It’s almost a composed salad."

Printed in 10 Downing menu: “Never eat more than you can lift,” a quote from Miss Piggy “We don’t want to take ourselves too seriously,” says Dorian. “Or to have people coming in here and wondering if there’s a dress code. You can see for yourself, there isn’t.”