Pizza As A Path To Self-Actualization

In a lot of ways, not much has changed since August, 2009, when Colin Atrophy Hagendorf set out to eat a plain slice at every pizza place in New York (a goal later revised to just encompass Manhattan), and to document the quest with a blog and photocopied zine called Slice Harvester. He's still working a restaurant job, still going to punk shows, and still scheming with friends over slices at pizzerias around the city. But he has also become a folk hero to pizza lovers, been profiled all over New York media, and just this week, published a book through Simon and Schuster. To celebrate the book's release, on Tuesday night he is putting on a hardcore show at the Silent Barn in Bushwick. When he broached the format of the event to the suits at his publishing house, he told me, they flipped their shit.

"Oh, they were so angry," Hagendorf recalled over a slice at Tony's Pizza on Graham Avenue on a recent evening. "They said, 'You can't just have a hardcore show!'"

He compromised by agreeing to a more traditional book reading at Word Brooklyn the following week. The book is the culmination of more than two years of pizza reviewing at 373 locations, two and a half years of book deadlines blown and revised, and negotiation over publishing details he'd never considered, like who gets to record the audiobook ("It would've been fine if they'd at least chosen someone with a New York accent," he said. "But they just picked some guy who can enunciate properly."). And the book almost didn't happen.

Hagendorf said that when the article about him eating his final slices near the Staten Island Ferry—he'd worked his way south from Inwood—ran on the front page of the Wall Street Journal, he was inundated with emails from agents with pitches like, "I did the blog-to-book deal for Penguins Fucking dot Tumblr dot Com," Or, "I did the book deal for Tucker Max."

Hagendorf's writing is full of these kinds of asides, and at one point in his book he compares a Midtown slice to the life of the Red Hot Chili Peppers frontman, writing, "Just because this slice might've been better if someone cared about it a little more doesn't mean we didn't have a fucking miserable time eating it." He ignored all of the emails, including an actually thoughtful one from Simon and Schuster head Jonathan Karp. Had Hagendorf's younger sister not been friends with the younger brother of Karp's assistant and told Hagendorf he was being rude, he may never have responded. He had just quit drinking after more than a decade of blackouts and bad hangovers, and was working to patch up a long-term romance, so a book deal was not high on his list of priorities.

In the meeting he remembers saying, "You wanna publish my zines? Great. What are you gonna pay me?" The publisher reps in attendance told him, no, they wanted a whole book of new material. Having just capped off more than 150,000 words on pizza, Hagendorf asked what he could possibly add. "I'm thinking Eat Pray Love meets The Basketball Diaries," Karp said. Hagendorf was sold.

The book is a breezy read that, like the earlier pizza chronicles, uses each bite as an entry-point to talk about life. Reporters writing "Man Sets Out To Eat All The Pizza In New York" stories shied away from discussing it much, but Hagendorf's blog was as much an accessible, chatty meditation on the joys and quandaries of being an anarchist, feminist punk as it was about pizza. The book includes rants about "Capitalist Death Culture" destroying pizza, "The Patriarchy" playing out in his own relationship with his girlfriend Christina, and an ode to his dead friend Jamie Ewing. There is a score-settling Billy Joel diss, a contemplation of the parallels between punk and Hasidic Jewish culture, and a comparison of longtime zine writer Aaron Cometbus to Jay Z. Slice Harvester manages to be at once hilarious and tragic, and relatable to some far beyond the confines of punk's self-built intellectual ghetto.

"Colin may have a punk rocker exterior but on the inside he has a lot to say." -some lady on Goodreads

Indeed, what sets Slice Harvester apart from much of the rest of confessional punk literature is Hagendorf's willingness to engage the outside world, to set up a blog even though he considers himself a zine-maker first, and to play ball with reporters where others would might have turned off their phones. He insists he did the project for himself and his friends first, but the calls from reporters he started getting a month into his project weren't unexpected. "I knew right away it was going to get media attention," he said. "I just didn't expect it to happen so fast." 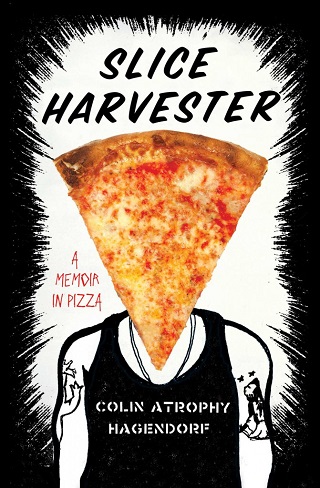 By the time he stopped harvesting in 2011, he'd achieved all the acclaim he says he cared about—"All I really wanted was to get a postcard from [Bikini Kill member] Tobi Vail saying she liked my zine"—but becoming a published author was good for one thing:

"That's the thing in my life that has changed the most since I got a book deal. It has retroactively validated every bad decision I made, in the eyes of my mom and dad," he said, laughing.

He also came away from the project friends with Joe Riggio, owner of 31st Street's Pizza Suprema. The pizzeria was the only one Hagendorf gave a perfect eight-out-of-eight-slices review, and he devotes a chapter to charting the Riggio family's history in pizza. It turns out Suprema founder Sal Riggio, whose first job upon arriving from Italy was burning boxes, made only cheese slices for decades, starting in the 1960s, single-minded in his quest to perfect the New York slice's purest form. The pizzeria struggled for many of those years, but is now flush with crowds from Penn Station and Madison Square Garden, and features a blown-up copy of Hagendorf's review posted prominently on the wall. It also now carries mozzerella slices.

The two make for an odd couple—Hagendorf a tattooed, nail-polish-wearing punk who believes the state should be abolished, Riggio a straight-laced business owner from Bensonhurst—but unlike the commenters Hagendorf sparred with on his blog, the pair are genuinely interested in each other's point of view. A sample conversation, as related by Hagnedorf:

"But it worked really well for my family."

"Yeah, but ya are now. It's easy for you to say that it worked well from where you're sitting."

The book ends on a celebratory note, with Hagendorf sober and having saved his relationship with Christina, but the fairytale ending has a postscript. The two are no longer dating, and though he appreciates sobriety, he still smokes weed on occasion, and believes he might drink again one day. Putting his personal life out there is reflexive, and he said he has no anxiety about the bar he's set for himself.

Now that the latest big project is done, Hagendorf is staying busy, and he's still not sick of pizza. (After polishing off two slices at Tony's, he leaned over mid-sentence to order a third.) He is a year into a podcast called Radio Harvester, where he interviews punk musicians and artists over slices, and has filmed three episodes of a similarly formatted web video series called Teevee Harvester with some friends in the industry. He's also writing a column for the punk bible Maximum Rocknroll.

Hagendorf is at home in New York, having lived here most of his adult life, and undoubtedly more so now that he has parceled up Manhattan into edible units and devoured them all. So naturally, he is planning to upend it all this fall and move to Austin, Texas, in pursuit of love—his current girlfriend lives there—and a change of scenery.

He explained the planned move, as he explains most things, with a long story. It involved a long, soul-crushing taxi line at LaGuardia, an encounter between a couple dressed like rhinestone cowboys and a pair of Teamsters, and a cab ride back, during which he learned that his driver lived a few doors down from his best friend's mother, who he visits regularly, in Rosedale, Queens.

"Amazing, transcendent moments happen here every day, but it's time for me to go," he said. "In Austin it won't be remarkable that a cab driver lives near somebody I know, because it's a small town. I just want to be able to not have to stand on a huge line, to be able to do laundry in my house, so that I can dye clothes in my bathtub and be able to wash it without walking it down to the laundromat. Stuff like that."

#blog
#book deal
#Colin Atrophy Hagendorf
#Simon and Schuster
#slice harvester
#zine
#original
Do you know the scoop? Comment below or Send us a Tip
A new Gothamist is coming! We’ve moved comments over to our beta site. Click here to join the conversation and get a preview of our new website.