Pinsa And Other Roman Delights At Williamsburg's New Montesacro

Our latest installment of Quick Bites brings us to Williamsburg for some pinsa, which is not pizza.

THE VIBE
Montesacro Pinseria Romana opened last week in the old Dumont space on Union Avenue. Owner Gianluca Legrottaglie has a similarly named, popular restaurant in San Francisco, which he calls the first in America to serve authentic Roman-style pinsa. Before his West Coast hit, however, Legrottaglie managed Aurora in Williamsburg and SoHo, and for Montesacro he enlisted the old gang to help him get his new place up and running. So it's a bit of a homecoming for him as well.

Montesasacro Pinseria Romana has a modestly sized front dining area, with a few tables set before a banquette along one wall, a small bar set opposite (which, until they get their liquor license, mostly sits empty), and an open kitchen. The real action, however, is in the large, airy backyard patio, which features a retractable glass roof that will stay open even on muggy evenings, the room cooled only by fans. Not going to lie, it's a little warm back here, but there is air-conditioning up front, if you insist.

The overall design is clean and bright, with lots of light wood, white trim, and pale gray tiles. Abundant plant life on the patio adds color and visual interest, and big round chandeliers bring a bit of drama to the scene. Both times I ate here the room was almost empty (it was super early) and so the servers and bussers erred on the side of frequent drop-ins and "how's everything tasting" inquiries.

THE BITES
Pinsa, so you know, isn't technically pizza—it's made from soy, rice, and wheat flours—but it's close enough that you're just going to sound annoying if you correct someone at your table who calls it that. Your server will make a big deal about how light and airy these are, and easy to digest, but honestly these things feel pretty dense and will fill you up just fine.

I ate four different pinsa on two different nights, with mixed results. The crusts are all the same, and they performed their function well, if a bit unmemorable. My favorite was the Ostia, a deftly balanced blend of big-flavored toppings, including bottarga shavings, thick pecorino cream, chunks of artichoke hearts, and fresh mint leaves. Also first-rate was the Maranella pie, with an abundance of spicy sausage, bitter broccolini, and a nice combo of both stracciatella and mozzarella. Mushroom funk overwhelmed the Corviale, on the other hand, to the point where I suspected truffle oil might be involved, and the baseline Margherita was pretty lifeless.

The most consistent rewards came from the Antipasti part of the menu, which delivered three-for-three winners. Each dish is a few dollars more than you want it to be, but get a few of these rather than another pinsa, is my suggestion. The Porchetta was fantastic, sliced "Roman style" thin with lots of crunchy bits sprinkled on top, and the Fiori di Zucca Frita, or fried zucchini blossoms, were lightly battered so as not compete with the mozzarella and anchovy stuffing. And the Polipo e Ceci was delicious, the thick well-charred tentacle laid out on a lively bed of oily chickpeas and fiery peppers. There are three pastas available, and the Mezzemaniche alla Carbonara was decent, the stumpy tubes a bit gummy, but overall it hit the right chewy, creamy, cheesy, porky notes. 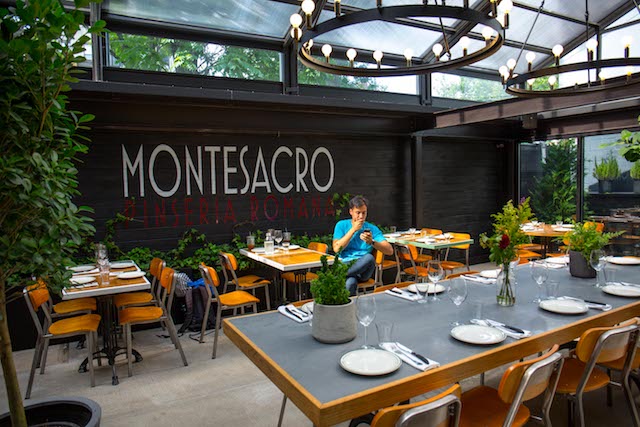 THE VERDICT
Sitting right near Lorimer L and Metropolitan G station in Williamsburg, Montesacro is a solid new meet-up option for groups or dates. The menu has both crowd-pleasers and some more adventurous dishes, and a high percentage of them are very good, though the prices are more in line with a night on the town than a casual quick bite.

Montesacro Pinseria Romana is located at 432 Union Avenue between Metropolitan Avenue and Devoe Street, and is currently open daily for dinner from 5 p.m. to 10:30 p.m., with lunch and brunch coming soon (347-916-1062; montesacrobk.com)