Pinkberry Taking Over the World 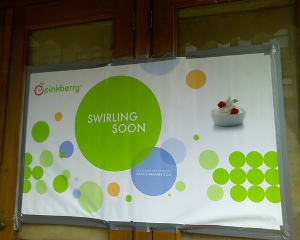 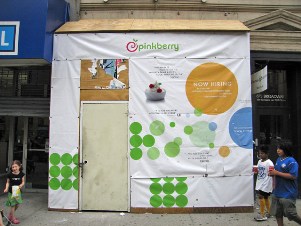 Did you ever wake up one morning and feel like something's not quite right with the universe? The other day, we had that very feeling. During the course of the day we learned that not one, not two, but THREE new Pinkberry locations are in the works in addition to the four existing branches. Do we really need three more Pinkberrys? Some people say yes. We mentioned the word "Pinkberry" in front of a friend last night and her reaction was downright freakish. She spewed adoration for the tangy unsweetened yogurt with cultlike intensity; if there are others like her in the city, then perhaps the exponential growth is a good thing.

Pictured above, the 6th Avenue location, near 12th Street, and another in Morningside Heights, at roughly 112th Street and Broadway. The third upcoming location will be 2nd Avenue between 54th and 55th Streets. Have you seen a Pinkberry in the works in your 'hood? Let us know.

UPDATES: Mia reports that a Pinkberry is in the works at 58th street between 8th and 9th, and Greg & upperwestside girl mention one either on Broadway between 70th & 71st, or 71st and Amsterdam. A commenter has spotted one on "3rd Ave & the 20s." Taking. Over. The World.

Camera in the Kitchen: Pinkberry
Pinkberry in the Fro Yo Challenge

#broadway
#food
#heights
#joe schumacher
#kitchen
#Laren Spirer
#morningside heights
#people
#photos
#Pinkberry
#strike
#the city
#The World
Do you know the scoop? Comment below or Send us a Tip