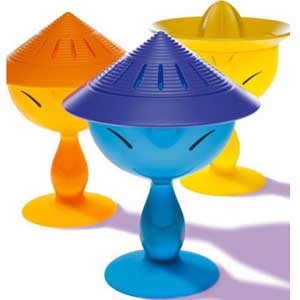 Chai Park and Jin Hee Lee, a law student and a lawyer, were stuck on line at a Manhattan Pinkberry last summer when they spotted the product seen here, an Alessi “Mandarin Citrus Juicer” that the frozen yogurt chain sells at some locations. They found the designer’s characterization of Chinese men as smiling toadies whose heads are great for squeezing juice a tad offensive. Though the Korean owners of Pinkberry insist the juicer has offended "no one," according to Racked it's no longer sold at that particular location in Koreatown.

Not satisfied, Park and Lee decided to draw a line in the sand and launched a “Drop the Juicer” campaign to “eradicate all Mandarin Juicers from the planet.” They say “the ‘mandarin juicers’ are to Asians what Aunt Jemima is to African-Americans, Frito Bandito is to Latinos, and anti-Semitic caricatures are to Jewish people… The message is simple: the ‘Chinaman’ will always remain a ‘Chinaman.’” (Of couse, Chinaman is not the preferred nomenclature.) And this isn't the first Alessi product to raise eyebrows among Asian-Americans: Behold the Mr. & Mrs. Chin Salt & Pepper Set!

UPDATE: We've received an email from Weber Shanwick, a p.r. firm that does "crisis management" and claims Pinkberry as a client: "We wanted to let you know that these items are being removed from our store. We started removing them awhile ago. We understand the concerns our customers had and we always appreciate and value their feedback. They were part of an eclectic collection and we in no way ever intended to offend anyone by displaying them." When asked if by "store" they meant "stores," the rep told us that all locations have been removing the Mandarin Juicer.

#Asian
#campaign
#chinese
#coolie
#juicer
#lawsuit
#Mandarin
#offensive
#Pinkberry
#product
Do you know the scoop? Comment below or Send us a Tip