Photos: What To Eat At Today's Big Apple BBQ In Madison Square Park

The smell of smoke and meat and smoky meat filled the air around Madison Square Park yesterday, as the 15th annual Big Apple Barbecue Block Party drew thousands of picnicking carnivores to the Flatiron District to sample the goods from 15 of America's most renowned pit masters.

The weather was warm and sunny, the crowds thick by early afternoon and the lawns of the park filled with satisfied and happy day-drinkers. And it's all happening again today, starting at 11:00 a.m! If you're going (and you should; some of this meat is terrific, and won't be seen again 'round these parts until next year), here's what you need to know...

Once again the key strategy is to show up early. From the opening bell at 11:00 to about 12:30 yesterday there were virtually no lines anywhere, and Fast Pass havers could zip right to the front of many booths as late as 2:30. Think of it as brunch, but with more ribs (and the same amount of alcohol). The Fast Pass, which costs $150 but comes loaded with $125 for food and booze, is totally worth it as a time-saver at most pits. Still get there early though; the line to buy a Fast Pass on-site was about 20 minutes long at 1:30 yesterday. 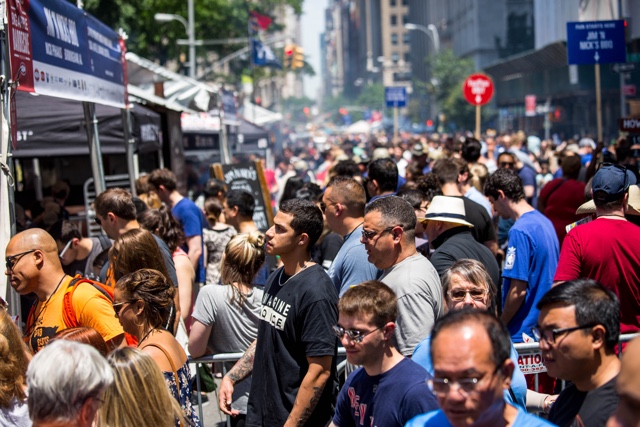 The Big Rig VIP Pass is $275 this year, and once again I can't recommend shelling out the extra cash for the more sedate, slightly shadier lawn; the free dumb milkshakes and catered "bites" like fried chicken; the slightly cleaner bathrooms. There is an open bar in the VIP area, so I guess it could make sense if you want to get hammered, but to me part of the day's appeal is wolfing down ribs on the sidewalk while goofing around and even sharing meat with strangers. After all, this is a Block Party.

The single best thing I ate all day was a wonderfully juicy and explosively flavored Jalapeño-Cheddar Sausage from Big Apple BBQ newcomer, the Fox Brothers of Atlanta. Their brisket was pretty good too. The portion size was considerably smaller than the also-delicious (but not quite AS delicious) brisket and sausage plate at Salt Lick, the perennial favorite out of Texas, but the line at Fox was about 75% shorter. I imagine, too, that Fox upped their offering as they got the hang of things.

In general, I enjoy the "ribs" sub-genre of barbecue more than "whole hog sandwich", and both the Baby Backs at Murphysboro, Illinois's 17th Street Barbecue and the St. Louis Ribs at Rodney Scott's BBQ, out of Charleston, South Carolina, made me very happy. That said, Chris Lilly's Pulled Pork Sandwich at Big Bob Gibson's was still a fine way to fill your belly. And though I tend to view eating readily-available NYC barbecue at this event as a waste of stomach room, the insanely-peppery Smoked Beef Short Ribs from Bill Durney's Red Hook operation, Hometown Bar-B-Que, and Blue Smoke's Brisket Burnt Ends were both fantastic.

Don't sleep on the excellent Chicken Wings and Sausage plate--featuring the best side-dish of the day, Bloody Mary Cucumber Salad--from the friendly folks at Ubon's Barbecue, who brought a huge crew all the way from Yazoo City, Mississippi for the festivities. The line here at Ubon's was much shorter, and the food much better, than at some other, more heavily-hyped pits. Every serving of barbecue, by the way, costs $12. 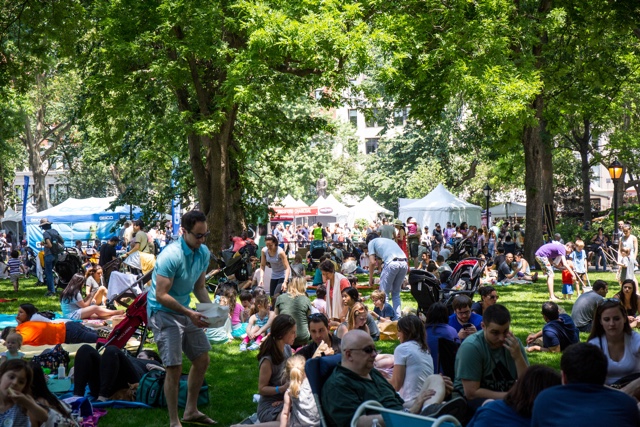 After all that meat you want something sweet, and though the Fried Pie Shop is as popular as ever (and don't get me wrong, makes for a decent dessert), the smart move once again is to go straight to the line-less Sugaree's Bakery tent near the northern fountain for some moist, sugary, totally delicious layer cake. Caramel, Chocolate, Strawberry, Red Velvet: all of these triple-layer beauties from the small-town Mississippi shop are likely good, but it's the photogenic, five-layer Rainbow Cake, arriving right on time for Pride month, that's truly irresistible for me.

In addition to all the food there's also a full slate of live bands playing near the Beer Garden at the south end of the park. The Big Apple Barbecue continues today from 11:00 a.m. to 6:00 p.m.