After lying dormant for most of the winter, there are finally signs of life at Williamsburg's forthcoming Whole Foods location. The massive new store was mostly a steel skeleton until about a month ago, when more structural elements were finally installed and the exterior started to take shape. Today, much of the store's glass elements at the corner of Bedford and North 4th are in place, save for the tower-like feature that will be used as a "Total Gentrification Sniper's Nest™" to take out anyone in Williamsburg still paying less than $3,000 for a studio apartment.

But when will this sucker actually open? It's been over three years since word got out about the Williamsburg outpost and it looks like we'll be waiting at least another year before stampeding through the doors. "Our future Williamsburg store is progressing quite well," Whole Foods Public Affairs Director Michael Sinatra told us. "At this time, we’re hoping to open the 50,000 square foot store, located at North 4th & Bedford, sometime during the Spring of 2016."

Once completed, the enormous 150,000 square foot complex will engulf the entire block from Bedford to Berry at North 4th Street and will also contain luxury rental apartments and a New York Sports Club, next door to the Duane Reade across the street from the Apple Store near the J. Crew steps from the Starbucks. As far as grocery store openings, this probably won't reach Wegman's-level of hysteria, but it's definitely up there! When completed, the shiny new edifice will look something like this: 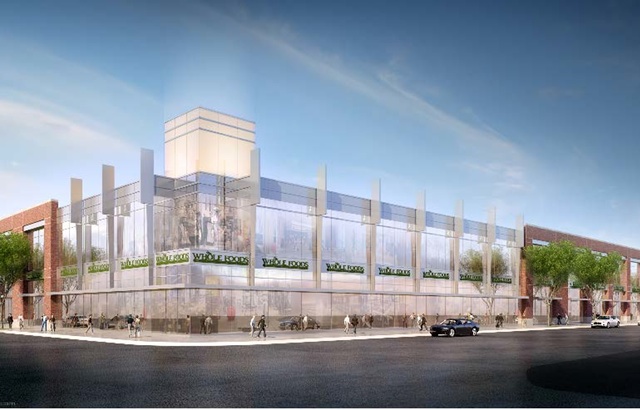 #Whole Foods
#williamsburg
#original
Do you know the scoop? Comment below or Send us a Tip