Photos: The Sprinkles Cupcake ATM Has Landed On UES

At long last, NYC has its very own 24-hour cupcake ATM. Sprinkles Cupcakes unveiled its first round-the-clock baked good dispenser on the Upper East Side at 9 a.m. this morning, and they've already started feeding a few sweet-toothed passersby.

The machine, which dispenses cupcakes for $4.25-a-pop, is stocked with fresh cupcakes regularly until 2 a.m. and restocked again at 9 a.m., which is convenient for anyone struck with a confection craving after one too many Buds at Subway Inn. The ATMs have already made a splash at Sprinkles locations in Chicago, Dallas, Atlanta and Beverly Hills, where the ATM was born. "In L.A., our biggest fan base is from UCLA or USC," Vineet Chaplot, Sprinkles's VP of International Operations, told us. "There are massive lines until 2 a.m. It's a good pick-me-up during finals."

Chaplot also noted that customers like the ATM, which offers cupcakes at the same price as the ones in-store, because they can avoid waiting at the cash register inside the bakery, which may appeal to legions of line-wary New Yorkers. And it seemed to be a hit when we stopped by this morning, with as many as 10 people gawking at the machine by 11 a.m.

"I love it. I like where it shows where it's coming from," one customer, Jeannette Lopez, told us. And Ryleigh Young, a younger customer in town from Arkansas to visit her brother, was impressed by the machine, noting, "There's nothing like this in Arkansas." (She also suggested they install pizza, hamburger and French fry ATMs, which are innovations we can get behind.) Though at least one person was unimpressed: "Really? Four dollars?" Edlin Cabassa, who declined to purchase a cupcake because he was watching his weight, told us. "Listen, I go to Little Debbie's and get it for 50 cents." 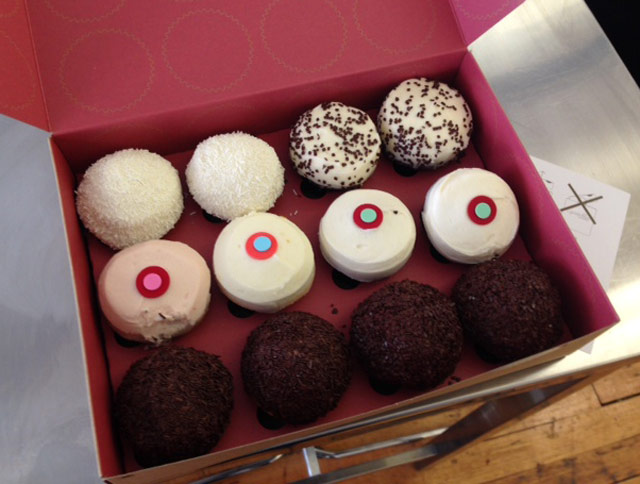 Sprinkles cupcakes when they come out of a box (Gothamist)

Chaplot says the company plans to install more ATMs in the city, with a second location in the World Financial Center set to open within a month or so. Sprinkles will also start adding fresh cookies to the UES machine, which is located outside their bakery at Lexington Ave near 60th Street.