Last summer Brooks Headley, acclaimed pastry chef at Del Posto, threw a one-night veggie-burger party with a pop-up on Eldridge Street, which he humbly dubbed Superiority Burger. The lines were epic—well over an hour, and Headley sold out in three—the hype through the roof, with many declaring this not only the best veggie burger in creation, but one of the best burgers period.

Superiority Burger showed up again a couple of weeks later, this time at the Cannibal (of all places), but as far we know, his side-project's been silent since... until, lo, yesterday in the East Village there came a Christmas miracle, when Headley and crew took over the old Dirt Candy spot for a few hours, starting promptly at 3:00. Could the promise of a veggie burger—even a Superiority one—actually draw a crowd in the middle of the afternoon on the deadest commercial day of the year? To quote Hans Gruber, "it's Christmas, Theo. It's the time of miracles."

Admittedly, the line at Superiority Burger on Christmas day was slow to build—there were zero people when I first showed up an hour before opening—and it never reached around-the-corner proportions. But by the time 3 p.m. hit, there were at least two seatings-worth of folks on 9th Street (Headley did not offer take out), and 45 minutes later, when I left the scene to do other things besides eat all day, the wait was even longer still. Yes, the Dirt Candy space is small, but this was an impressive turnout for the day... so much so, in fact, that Headley hinted he might be taking Superiority Burger to the next level in the coming year. 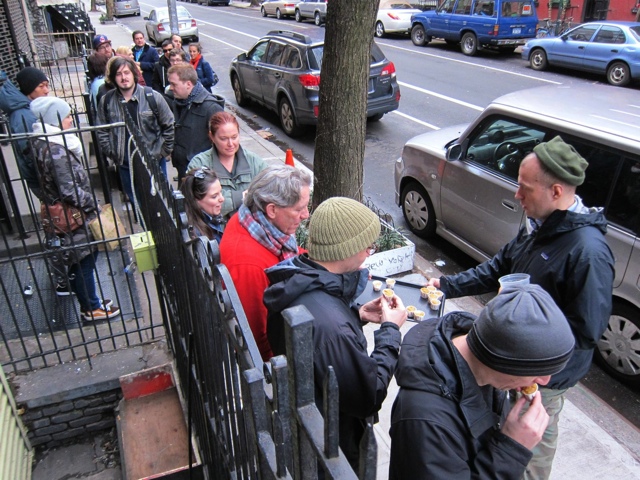 Those waiting in line get an amuse (Scott Lynch / Gothamist)

So what's the big deal here? I can say without equivocation that the Superiority Burger—really more of Superiority Slider for this pop-up phase—is the best veggie burger I've ever had. It's rich and dense, slightly smoky, totally satisfying. I wolfed mine too quickly to try and figure out exactly what was going on here, but an aspiring food detective next to me dissected hers and found things like quinoa, black bean, maybe lentils, and walnut. More obviously: pickles, mustard, and melted muenster. And unlike some meat-wannabe veggie dishes, the Superiority Burger isn't just stuffed with, say, a ton of garlic to distract you from the fact that you're not eating cow. This is the real deal, a sandwich you'd buy and eat just because it tastes really good.

And the rest of the meal was equally accomplished: a side of Charred Broccoli Salad, which had a whole lot of Thai inside (lemongrass, nuts, those red peppers); and the leave-em-smiling finish, Candy Cane Stracciatella Gelato, and Satsuma Orange Sorbet, both wonderful enough to imagine Headley giving Nick Morgenstern and Sam Mason a run for their money if he decided to go the ice cream parlor route.

Dirt Candy owner/chef Amanda Cohen showed up at one point, acted facetiously jealous of the long line outside her old spot, and told me that she's still very much on target to open her new, larger Dirt Candy on Allen Street in late January.

#Brooks Headley
#Dirty Candy
#superiority burger
#veggie burger
#original
Do you know the scoop? Comment below or Send us a Tip
A new Gothamist is coming! We’ve moved comments over to our beta site. Click here to join the conversation and get a preview of our new website.