The Smorgasburg + Brooklyn Flea empire is, as the names suggest, very much a Brooklyn thing, born and raised in the trendy, leafy, and/or brownstowned precincts of Fort Greene, DUMBO, Prospect Park, and Williamsburg. And though the Smorg team has successfully expanded the operation to a few distant locations—Los Angeles, Osaka—a long-term home in Manhattan has so far proven to be elusive.

Given the steady crowds and general air of enthusiasm last Friday at the season's first Smorgasburg World Trade Center, that seems about to change.

Located in the wide plaza under the soaring wing of the Oculus—the Santiago Calatrava-designed transportation hub that looks like a dinosaur skeleton—Smorgasburg WTC brings 25 food vendors to one of the most heavily trafficked sites in the city, with its seemingly non-stop stream of area office workers and tourists from all over the world. They'll be open for business every Friday from 11:30 a.m. to 7 p.m.

Less common fare is also in plentiful supply, including Afghan comfort food from the Vendy-award winning Nansense; fiery, fried chicken-filled pineapples at Thai Bird; meat-stuffed Salteñas at Bolivian Llama Party, lobster noodles at Yakitori Tatsu, and Argentinian sausage sandwiches at The Choripan. Sweet treat duties fell to Ring Ding Bar, which sold out everything by mid-afternoon, and the Bona Bona Ice Cream truck, which specializes in toasted-to-order dollops of marshmallow atop their cones and was slammed all day. 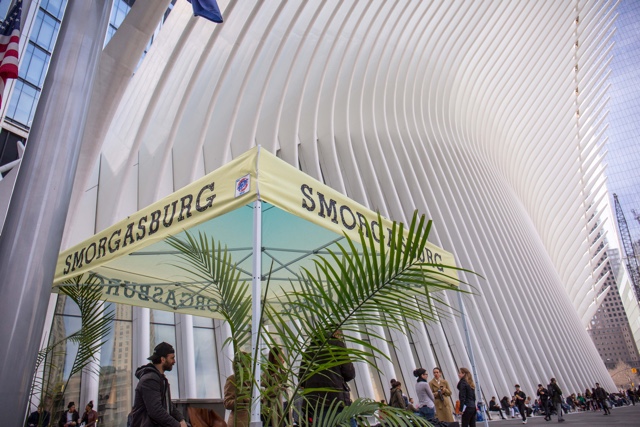 Smorgasburg co-founder Eric Demby told Gothamist these vendors are "our core long-term vendors because this is a big lift. You need to have all your paperwork in order—and you're also going to be getting crushed every Friday. They need to be serving for eight hours, so we chose vendors that have the intestinal fortitude to serve quickly, and together represent a kind of greatest hits of the market."

"I mean, a lot of people have good food but execution is obviously a huge piece of it," Jonathan Butler, Smorgasburg co-founder, added.

There have been some logistical challenges for the Smorgasburg team, given the extreme visibility and symbolic importance of the spot. Security, for one thing: the vendors' trucks have to be x-rayed in an underground passage before they can enter the plaza to unload, and you definitely don't see this many (or any) heavily armed police officers at the market's other two venues. No port-a-potties allowed either, but there are public restaurants in the Oculus, as well as in the structure covered in murals.

Nansense chef and owner Mo Rahmati said he woke up at 3:30 a.m., because of all the traffic ("the Van Wyck, the L.I.E.") and "getting through security here." However, he was excited to share his dishes, Afghan comfort food like chicken korma and mantu dumpl with a new neighborhood, "These are all my mom's recipes and growing up there there's never any complaints about her food. Her food was always like top notch and everyone said it. So I just felt like the public kind of needs to know about it."

There's a good amount of seating at Smorgasburg WTC, on the deep "bench" running the length of the Oculus, and at tables and squat little cubes in a separate plaza right to the north of the food booths, where you can eat amid highly photogenic street-art murals. This latter space will likely become a Beer Garden to kick off Memorial Day weekend, and remain in place (and maybe even stay open late) on Fridays all summer.

"It is possible to add more vendors as the summer comes, and we can get up to about 30 vendors here," Demby said. "I think if it's just if it's just bananas here every single Friday, I think everyone will understand that we could add a few more but, you know, every conversation returns to this sanctity of the space, so we don't want [Smorgasburg] to overwhelm it."

Smorgasburg WTC is located under the northern wing of the Oculus, just west of Church Street, and is open every Friday through October from 11:30 a.m. to 7 p.m. (smorgasburg.com)

#oculus
#smorgasburg
#smorgasburg wtc
#world trade center
Do you know the scoop? Comment below or Send us a Tip