Vincent Vega and Jules Winnifield musing on the Royale with Cheese. Hans Landa enjoying a strudel with cream. Mr. Brown explaining the true meaning of "Like A Virgin" to a group of criminals while having breakfast and coffee in a diner. There are numerous unforgettable restaurant and bar scenes spread out through Quentin Tarantino's cinematic oeuvre. And now, NYC has its own bar/restaurant dedicated to all things Tarantino.

Killbar officially officially opened on Thursday night on South 4th Street in Williamsburg, though it was more like the continuation of an ongoing soft opening the bar has had all month. Owner Michael Galkovich, who was previously involved in the now-closed Will Ferrell-themed bar on the Lower East Side, has stuffed the place with Tarantino-themed decorations, artwork, and a movie screening.There are drinks such as the Champagne Popsicle and "Bloody Bride" Mojito; there's food options including Pussy Wagon Tacos, Hateful 8" Wings and It's Poppin Jalepeno Poppers. 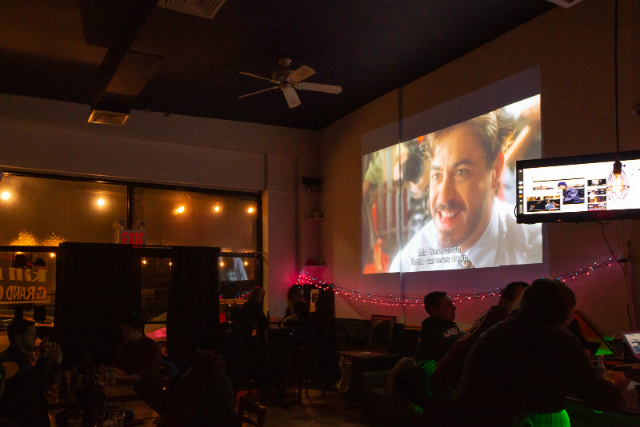 There are quotes from Kill Bill on posters and a six-foot painting of The Bride on the wall. There is other artwork that references Pulp Fiction (including a sketch of Jules eating a burger), Django Unchained (including a painting of Django on his horse), illustrations of Tarantino himself (there's one to the left of the front door), and a lot of other Easter Egg-type references for fans.

Gregg Sicarian, who worked with Galkovich on the interior design, said the place is still a work-in-progress, and more artwork would be up soon. They hope to have a place for live DJs to set up, and in about a month, they plan on building a stage in the bar near the front so they can have open mic sessions called "Train Wreck," with all styles of music from rock to rap. 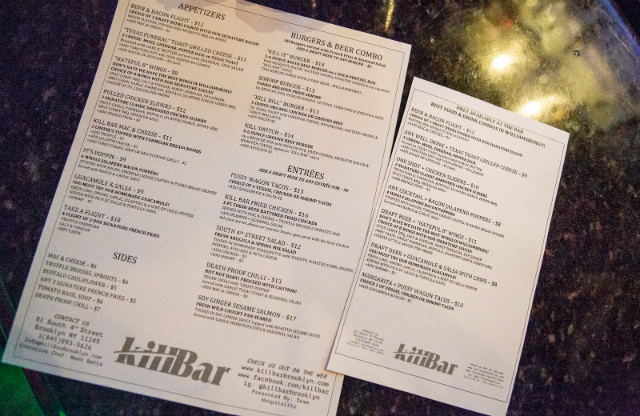 They'll also be showing Tarantino movies on the big screen regularly—Natural Born Killers, for which Tarantino wrote the original story, was playing there Thursday night (you can check out what they'll be showing and when on the sidewalk chalkboard). There were also "blood wound splatters" painted outside the bar—one dude decided to be cute and play dead on top of it, as you can see in a photo in the gallery above. 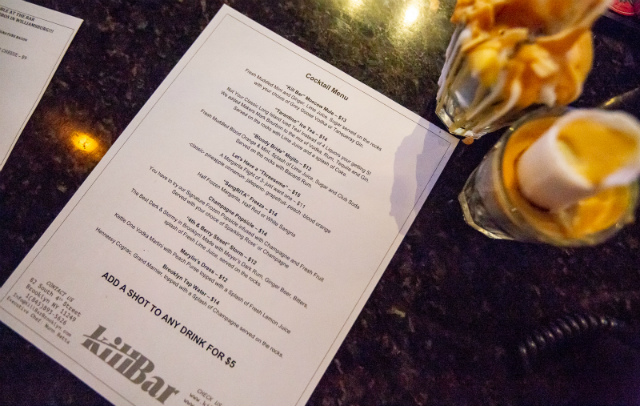 Before you head over there: if you're a huge Tarantino fan, you might want to check out the video below, which discusses the power dynamics in Tarantino movies as they relate to food.

#kill bill
#killbar
#movies
#quentin tarantino
#williamsburg
#original
Do you know the scoop? Comment below or Send us a Tip