Hundreds of hungry humans attended the NYC Dumpling Festival at Sara D. Roosevelt Park Saturday, eager to sample dough-encased eats from a multitude of global traditions. Empanadas, pierogis, ravioli, samosas, and traditional Chinese dumplings made up only a portion of the day's global fare, and despite long waits at every food stand, it seemed as though every man, woman, child, or dog was enjoying themselves.

But even with so many savory meats and vegetables encased in glorious taut skins of dough, the day's best entertainment came from the stage, where vegetables encased in glorious taut skins of dough were only half the fun. It was all about the stage shows Saturday, which kicked off with men's and women's dumpling eating contests—as many as you could scarf down in two minutes flat. Male champion David Brunelli put away 78 dumplings as he cruised to a first place win, his third in a row at the NYC Dumpling Festival, while women's champion Molly Schuyler set a new world record with her win, packing away 93 dumplings. Schuyler has been traveling cross-country, eating competitively for three years; after leaving the Dumpling Festival, she planned to head to Buffalo for a timed pumpkin pie face-off.

From the creamy parmesan sauce that enveloped each ravioli to the spicy chicken that lay waiting in every golden brown empanada, the flavors on hand at the Dumpling Festival were bold and varied—and also a bargain. $20 bought a booklet good for five different servings of dumplings, as well as entry to win raffle prizes like a Roomba, GoPro, and two free first-class plane tickets to anywhere in the contiguous United States (first class). Just off-stage sat a forty pound (apparently ceremonial) mega dumpling, itself stuffed with over 100 dumplings. 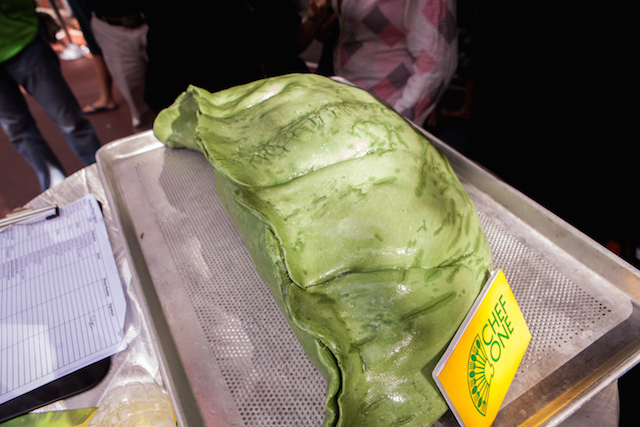 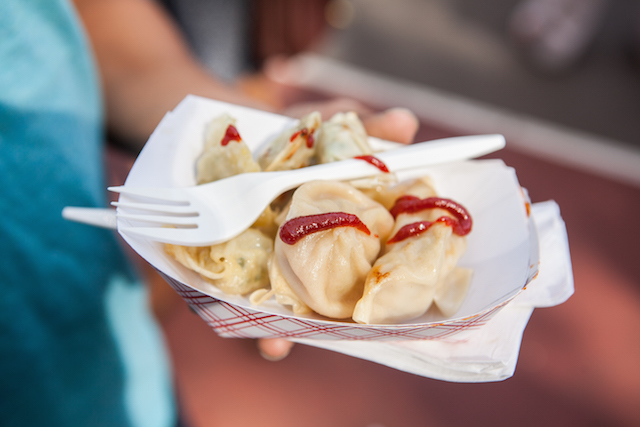 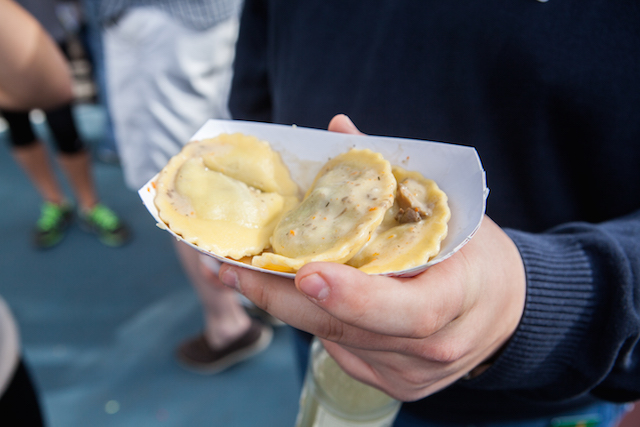 Later in the afternoon a string trio performed a 30 minute long medley of songs, backed by break dancers, that never rested for a single moment. Hungry ticket-holders stuck in long lines watched and cheered as a live mixtape of A Tribe Called Quest, Ariana Grande, Jay Z, C & C Music Factory, and The Roots was delivered by way of tireless violinist with a tiny Statue of Liberty bust attached to his instrument. Everything was strange and brilliant.

And then it all got stranger. Midway through a beat-boxer's 20 minute routine at approximately 4:30 p.m., flames began to spout from one of the stereo's large power generators behind the stage. His beats were literally on fire. A technician was quick to extinguish the blaze, but could not stop the smoke that continued to billow out of the machine until the FDNY arrived to set things right. Presenters made the best of it, doling out a few more raffle prizes with the help/hindrance of a bullhorn, but at that point most fest-goers were filing out of the park, happy and full.

#dumplings
#nyc dumpling festival
#original
Do you know the scoop? Comment below or Send us a Tip
A new Gothamist is coming! We’ve moved comments over to our beta site. Click here to join the conversation and get a preview of our new website.