Ask Hannah Cheng what's in her mother's secret sauce and you'll be met with smiling silence. "If someone needs to know if there's seafood in it, we'll tell them," Hannah told us as her sister and business partner Marian brought over a fresh plate of chicken and zucchini dumplings. "We finally convinced her to tell us the ingredients a little while ago, and we're her daughters! Starting a restaurant with her name on it!"

Mimi Cheng's Dumplings will open its doors to the public today with the promise of diligently-sourced ingredients and a menu that keeps it very simple with just three types of savory dumplings. At the top of that menu is the flagship Mimi Cheng, a recreation of the Cheng sisters' beloved home recipe that packs chicken and zucchini into a folded half-moon dumpling. Also on hand are pork dumplings prepared with bok choy and cabbage, as well as a vegetarian kale, mushroom, and egg dumpling (sorry vegans).

The Cheng sisters made a concerted effort to cook with only pasture-raised meat and organically-grown vegetables. "We adore eating dumplings, but we also have a passion for good, clean food and ingredients. We wanted to be able to eat healthy at our own restaurant," explained Hannah Cheng. Each dumpling variety is wrapped in a different shape, which eliminates the "guess the innards" game that dumpling dinners often devolve into, and prices are fair for the East Village: $8 for six dumplings, $10 for a plate of eight. 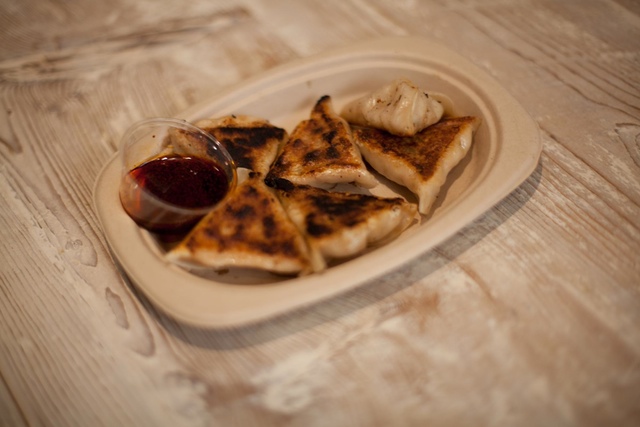 The sisters—who have backgrounds in both the fashion and banking industries—opened the restaurant with a mind to bring their mother's slightly-famous home cooking to the masses. "I used to have dumpling-eating contests at home with my friends. During college, everyone would want to come home to visit just to eat them. Now, our co-workers go crazy when we bring in mom's dumplings. They offer to pay us for more!" Cheng said, blushing slightly.

For our visit, we brought along a longtime dumpling aficionado Eric Chung to offer his take on the new shop's fare. Chung, who grew up in Hong Kong and has spent three decades in search of great dumplings, was smitten with each bite of the thin and perfectly-crispy skin, but was let down by the dumplings's inner textures, due in part to the lack of a binding ingredient like egg white. We were also both left perplexed by the vegetables, wondering what had happened to the bok choy, cabbage, and zucchini listed on the menu. Both the chicken and pork dumplings were almost all meat, no greens.

"Chinese cooking uses a lot of aromatic items like ginger, garlic, onion, and Mimi's certainly could have had those ingredients," Eric said after we had finished. "The flavor that was really missing in action was Chinese sherry—shaoxing rice wine. I wouldn't think about making dumplings without it."

But what of the ever-so-secret sauce? It's delicious. Just the right balance of spicy and savory, the cups of red dipping sauce that accompany every plate of dumplings make each bite a little lovelier. "All I can tell you is that it uses olive oil," Cheng told us, which, given the vinegary tang of the sauce, surprised Chung. 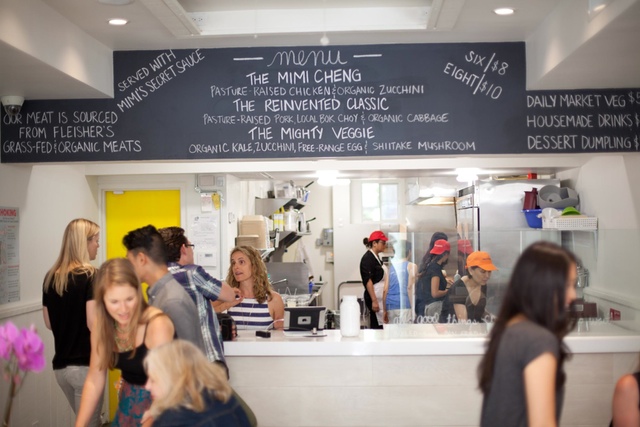 Leaving 2nd Avenue's dingy din for Mimi Cheng's is like stepping into a meticulously-pruned home decor Pinterest board come to life. The ivory white painted walls are lined with simple art, surf club regalia, and hazy photographs of Montauk, while the pine picnic-style tables expedite dumpling sharing (or stealing). As a dining room, it's exceedingly pleasant and modern; the restaurant's clean and sunlit aesthetic feels a bit more like a west coast pressed-juice bar than a Manhattan dumpling shop. We have officially left the shadows of the former East Village behind.

"Conspicuously simple" is the best descriptor for what awaits at Mimi Cheng's. The limited menu offerings, Fleisher's-sourced grass-fed/organic ingredients, and pitch-perfectly rebloggable decor all aims to beautify the dumpling experience. And in that respect, the shop is a success; Mimi Cheng's bullseyes the bespoke minimalist target it has made for itself. All that simplicity, though, may be coming at the cost of classic Chinese flavors and the liberating openness of a massive menu adventure.

#dumplings
#east village
#food
#mimi cheng's
#new restaurant and bar radar
#organic
#original
Do you know the scoop? Comment below or Send us a Tip