Photos: Inside The Historic Monkey Bar, A Classic Clubhouse In Midtown During the Great Depression, a new business opened on East 54th Street, and it's still there today—one of the rare time capsules in NYC still emanating the spirit of a bygone era. Hotel Elysée was founded in 1926 by Max Haering, and in the late 1930s (1936, we're told) the hotel's new proprietor, Mayer Quain, opened the Monkey Bar just off its lobby, though it wasn't formally named that for another decade or so. While the hotel came first, it's impossible to separate it from its bar.

Starting out as just another dimly lit hotel piano bar with mirrored paneling, patrons started to mimic one another (“monkey see, monkey do”). The tiny room was formally named The Monkey Bar in the early 1950’s when the mirrors came down and were replaced by wrap-around hand-painted murals of monkeys by caricaturist Charlie Wala. [Ed. note: Today, those murals have been retouched and added to by Ed Sorel.]

Sadly, there seems to be almost no visual documentation of the bar and its patrons during its glory days—even the current restaurant publicity team doesn't have anything on record. But its got quite a "if these walls could talk" history. 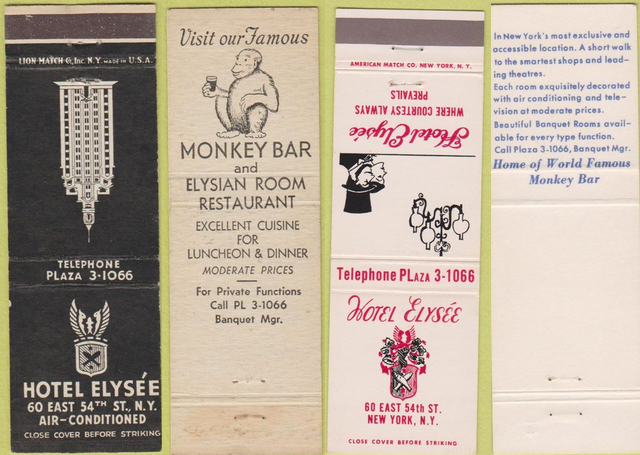 According to the NY Times, the bar, under Quain's direction, was open from 10:30 a.m. to 4 a.m. It featured "naughty" piano acts and lots of booze, and Life Magazine referred to it as "a swank version of a theatrical boardinghouse." It attracted some known names, like the Gish Sisters, Robert Benchley, Isadora Duncan, Babe Ruth, Ava Gardner, Helen Hayes, and Tennessee Williams, who swallowed a cap and died in the hotel, where he had been living for two decades.

Tallulah Bankhead was also a regular, having lived in the hotel with her pet lion cub for some time, and Frank Sinatra, Marlon Brando, and Joe DiMaggio were frequents guests themselves.

Other characters spotted regularly at the bar included the talent, like Johnny Andrews, who played piano there for 50 years. He told the NY Times in the 1990s, "Originally they had live monkeys in there. The Board of Health stopped that immediately. So they got rid of them and painted some on the walls." Whether or not that's true (a publicist could not confirm), the monkey motif remains today.

Meanwhile, in the world of fiction, this is the place Holden Caulfield knocked back a few scotch and sodas, though in the novel it's called the Wicker bar.

It's one of those places that are supposed to be very sophisticated and all, and the phonies are coming in the window. They used to have these two French babes, Tina and Janine, come out and play the piano and sing about three times every night. One of them played the piano—strictly lousy—and the other one sang, and most of the songs were either pretty dirty or in French.

When Mayer died, his son Leon took over the business, and its name slowly began to fade from the papers, only to return in 1983 when Tennessee Williams died inside the hotel. In the 1990s, the bar abruptly closed and remained shuttered for a couple of years, before reopening under new management. 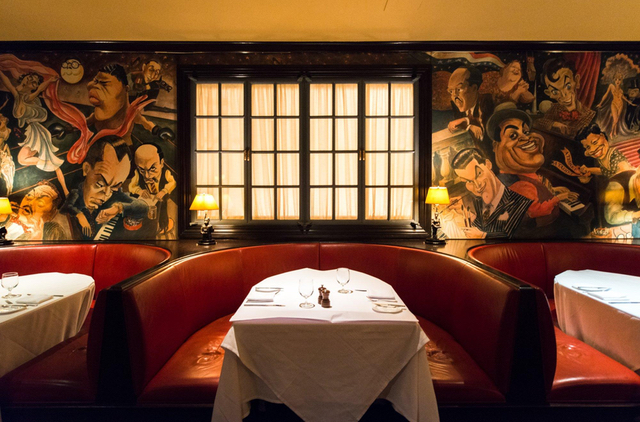 When Vanity Fair's Graydon Carter took over the business in 2009, he reinvigorated its old school glamour, making it special again, and so far successfully. Upon its reopening under Carter's charge, Frank Bruni declared it be a "clubhouse," complete with touches from a bygone era, more like the old days than the most recent days.

The Monkey Bar is located at 60 East 54th Street, btwn Park and Madison. These days, the bar only stays open until 1 a.m.

#classic nyc
#midtown
#monkey bar
#the monkey bar
#original
Do you know the scoop? Comment below or Send us a Tip