Photos: Inside The Best Williamsburg Pizza Party Ever On Wednesday night, a group of artists and pizza enthusiasts banded together in Williamsburg to throw a big bash in honor of everyone's favorite cheese-tomato-carbohydrates mashup, pizza, on the occasion of its 125th birthday. Hundreds of people showed up for Pizza Day, the first event thrown at the newly-christened Standard Creative Studio on Wythe Avenue. Although they had 125 years to prepare for it, what's most remarkable is that the event was thrown together in just about a week, and with little social media hype: "I feel like everyone has silly ideas," said organizer Ronen V. "Everyone. It’s not like a few people have a thing. Everyone’s creative. Some people are crazy enough to give it a shot."

Between the pizza quiz and singing happy birthday, children tumbled on stage, men in purple pants posed on empty pizza boxes, and an artist made marinara-portraits of people. Altogether, more than 400 pies were ordered from various pizza places all across Manhattan and Brooklyn. It's hard to tell whether it truly was every pizzeria in the two boroughs, but it's safe to say it was probably closer than anyone has come before. And despite organizers being nervous about running out of supplies initially, there was too much food, if anything (organizers said the leftover pizza was taken to local food banks after the event). 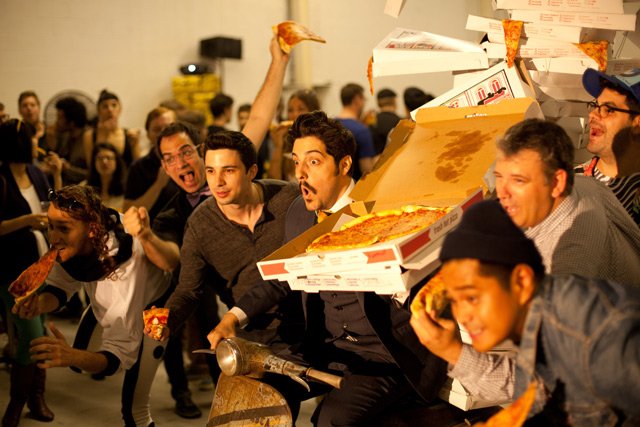 Ronen told us how the idea germinated:

My friend Joey moved to New York and he didn’t know what were the good pizza places. So I said, 'let’s go to every pizzeria in New York in one night, taste all of them, and then we’ll know which are the good ones.' Our friend Matt Capucilli was like, 'Well, there’s no way you’re going to get to all of them in one night. You should order in from all of them and make it a huge party.'

And we were out drinking in a bar with Pete Berkman from Anamanaguchi, and he looked up pizza on Wikipedia and was reading us the history of Raffaele Esposito [who is credited with inventing pizza], this was about a week ago. And suddenly it became: 'Oh my god, this is next week, we need to do it for Pizza Day! This needs to be a holiday. This genius hero of history...should be a hero.'

Ronen got in contact with Michael Cirino of A Razor, A Shiny Knife, whom Ronen had previously collaborated with on the six-course gourmet dinner party on the L Train back in 2011. Cirino was on board immediately: "He told me, 'you’re gonna get a spreadsheet in 20 minutes that breaks down the city by district, estimated times.' They called a bunch of places, he had a budget, so now it was a practical thing. 'We need this many people. We’re gonna need trucks that the Lower East Side can deliver to. Take this many people to deliver.'" 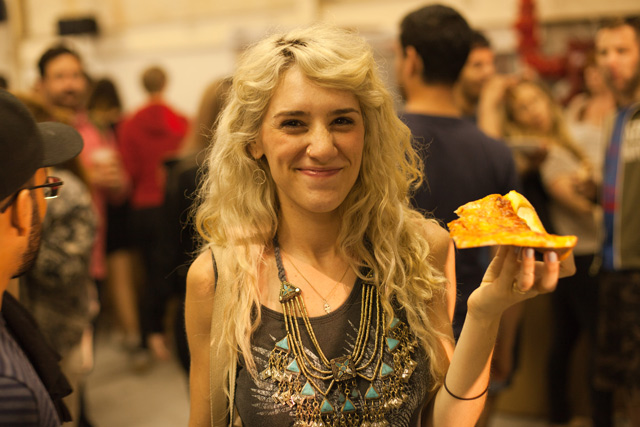 They enlisted musician Jonathan Mann, who came to fame on the internet thanks to his song-a-day project, to write some pizza carols; beer provider Shock Top (a subsidiary of Anheuser-Busch), who paid for all the pizza as well (on one day's notice); and photographer Thierry Van Biesen, who crafted the interactive pizza box installation that served as a center piece of the event.

"This party came about as almost a joke discussion last week," Van Biesen, who just moved back to NYC two weeks ago, told us at the party in between taking photos of various people posing on his 'Leaning Tower Of Pizza.' "Normally I'm a photographer, but I was wondering what I can do to contribute instead of just taking pictures. So I made an installation that looks like my pictures and allowed everybody to be able to walk into one of my pictures and shoot themselves. So it’s one of my pictures, only it’s the first time I’m making it into an installation."

He admitted that even his friends were skeptical when they first heard about the event: "I was wondering if people would take it seriously. And some people did connect with me on Facebook and ask me if it’s for real." There was no advance press besides a Gothamist article; the group only posted about the event to their Tumblr and Instagram accounts, and hoped people would pick up on the word of mouth.

"We’re just so used to getting bad news, and we have all of these systems that move information really quickly, but the information that bursts through them the fastest is bad news," Ronen mused on the subject. "By throwing a surprise party for New York, which is how we like to think of it, you're getting sudden news immediately that you weren't expecting. But instead of making you afraid, like an amber alert, it brings a smile to your face, it makes you laugh, it makes you happy. It’s good news." 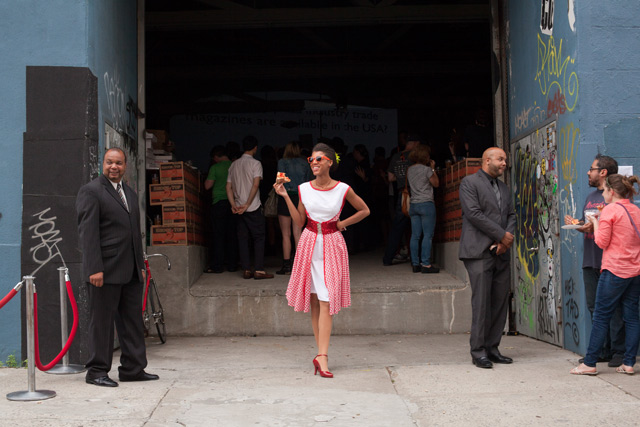 Reggie Watts, who is friends with the Standard Creative Studio crew, said he heard about the "crazy idea" a week ago as well, and was worried they wouldn't have enough time to get it done. "People are here by some strange unifying circumstance called pizza and beer," he told us. "You cant really ask for anything more perfect than that to bring people together...for free!" Anamanaguchi were originally planning on doing a DJ set from Tokyo (where they are currently on tour), but Watts ended up filling in and DJing toward the end of the evening.

Everyone seems to agree that they hope that Pizza Day becomes an annual tradition, although Ronen isn't sure whether he'd be involved in it: "What’s less interesting to me is, are we gonna do it again? Because if we did our job, then everyone who leaves here will go do some crazy idea of theirs that they wouldn’t have thought was realistic yesterday. And if then if they do it, someone else will think it’s too good to be true."

#brooklyn
#free pizza
#pizza
#pizza party
#reggie watts
#williamsburg
#original
Do you know the scoop? Comment below or Send us a Tip