Photos From Inside The Four Seasons Auction Preview

When the Four Season opened on East 52nd Street in 1959, the NY Times penned one of the most glowing reviews to ever grace their pages. "There has never been a restaurant better keyed to the tempo of Manhattan than the Four Seasons," they declared shortly after its opening that year. "Both in decor and in menu, it is spectacular, modern and audacious. It is expensive and opulent and it is perhaps the most exciting restaurant to open in New York within the last two decades." Have you read a review like that in the recent past?

The Four Seasons wasn't earning these words because of the food it was serving; it was just special, somehow. I'm sure I'd be able to expound upon this had I ever been able to afford a seat by the pool there. "On the whole," the NYT reviewer Craig Claiborne wrote, "the cuisine is not exquisite." And it never really was, and it certainly wasn't as it closed its doors. But even overpriced and mediocre, and not without controversy, the old soul of the place was still a draw for many. Its existence felt nice, as a tie to a more glamorous era, even if you never stepped inside.

Anyway, it's gone now! The Four Seasons shut its doors in the Seagram Buildling on July 16th. Though a new version of the place will open on Park Avenue, it won't feature all the mid-century gems that adorned the iconic 52nd Street space over the decades, as those are currently on the auction block. Yesterday we dropped by the preview, held inside the original space, which still has that iconic pool filled with water. 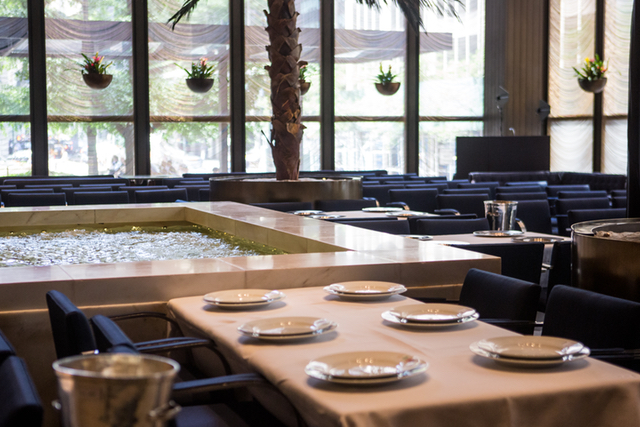 Everyone "walked around carefully and spoke in hushed voices," our photographer Scott Heins reported back. "The place feels like a wake held in a department store."

Yuliya Kaspler, a jewelry collector from the Upper East Side, has been coming to the Four Seasons for over 20 years, and was perusing the pieces yesterday—"It's a place that's very familiar and comfortable to me. I collect jewelry, I collect objects, so the pieces that I'm looking for are the pieces that would fit in to my collections and the style of my homes."

Kaspler had her heart set on certain items from the place—"It has to be something iconic to Four Seasons... what are the most iconic silver pieces? The breadbaskets, the three chicken feet. That's what I'm looking for." 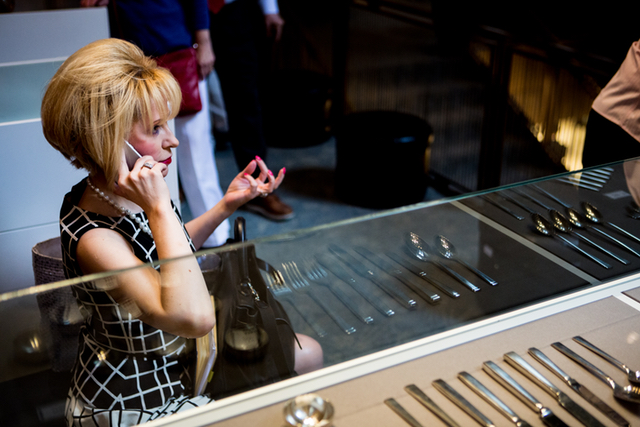 Peter Wood, also from the Upper East Side, has been going to the Four Seasons for 28 years, and told us, "It's just magical. It's very hard to describe it otherwise. You're not coming here for just one reason, it's not like you're coming here for a particular dish or food. You're coming here for the experience, the atmosphere, the staff, the environment. You feel like you're losing something important in your life. As all New Yorkers are, we get attached to things."

Those sentimental about the place can white-knuckle onto the past by bringing a piece of it home with them; the public preview will be open until the date of the auction, July 26th. On that day, you can bid in person or online (details here). The starting bids on these items will be a minimum of $200, and go up to about $100,000.

As for Kaspler, she'll be showing up herself—"I wouldn't go to every live auction, this is one I want to be a part of, just to have this as a completion of the experience of Four Seasons." 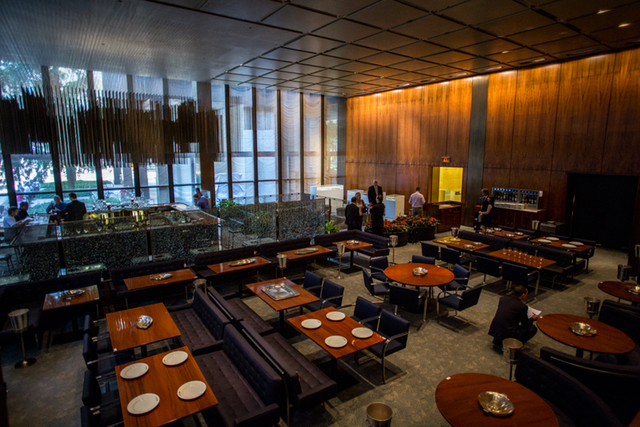 N.B.: Wine is still being served during the previews.