Photos: Fried Peanut Butter Cups On A Stick & So Much More At The Minnesota State Fair Mass gatherings in the Midwest are a bit hard to come by. Pro sports and arena-sized concerts aside, there's almost no opportunity to mingle, to weave through great crowds, for America's non-urban millions. Long lines are scarce. Most people drive and know nothing of droves. There's the occasional parade or waggish town festival, but even today Midwestern life is one of rustic seclusion compared to the existence that New Yorkers live and breathe. Weekend plans hinge on the weather, "driving into town," and when you'll be able to mow the front lawn; you commune with the world via the living room couch and the convenience of on-demand cable.

On the other hand, there are state fairs.

State fairs are the Midwest's great crowded moments, yearly collisions of non-stop humanity that give the Central Time Zone a taste of urban East Coast routine. Varied only in date and local state kitsch, fairs are credulous and strange and entirely great—none greater, in this Gopher State native's opinion, than the Minnesota State Fair, which is the most well-attended state fair in America and something that every New Yorker should visit at least once. Why? I'm glad you asked... 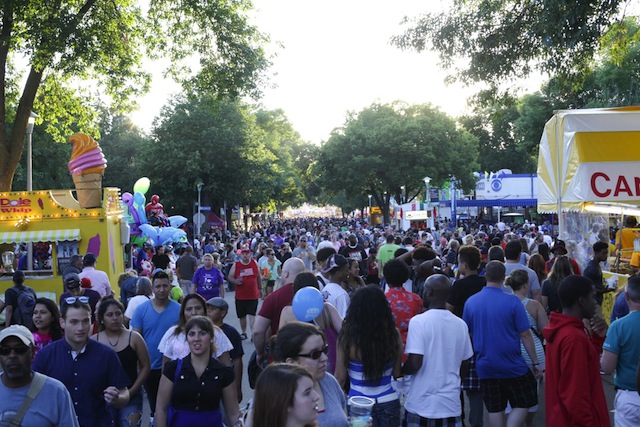 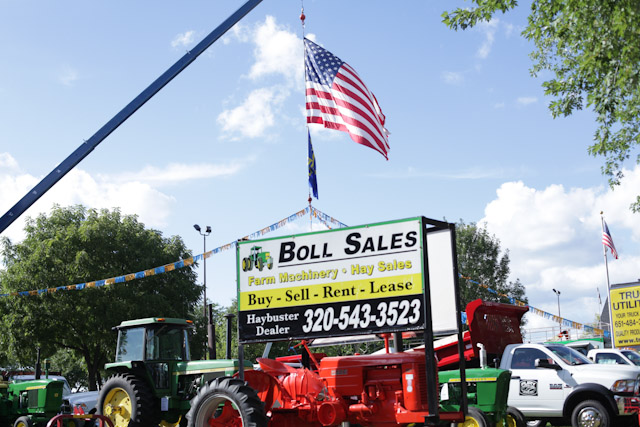 During my visit last month the air just past the gates is syrupy with the steam of frying food. Rich exhaust from tiny generators rises to form low clouds and the sun blurs before it hits the fairground's picnic tables. My corn dog stand of choice sells "Mojito Beergaritas" and the man ahead of me wears a shirt that reads "I BELIEVE IN DUCT TAPE." More than one pair of camouflage-pattern Crocs are in full view.

With half-eaten corn dog and mustardy hands I stop at an information booth, where a nice lady named Cindy gives me a map. She points out the midway and circles the dairy barn, where butter sculptures of farmers' daughters are on refrigerated display. Cindy tells me that the fair has been running since 1859, that it was here in 1901 Teddy Roosevelt first suggested America "Speak softly and carry a big stick," and that I should definitely try the chocolate dessert salami ("No meat included!"). I thank her and truck off toward the midway.

The Fair's hundreds of acres hold hundreds of thousands of people holding portable food. There's bacon-wrapped turkey legs, bacon-wrapped corn, and deep-fried lobster on a stick. Near The Fair's giant slide I pass an alligator sausage stand doing brisk business and line up for beer-infused gelato (2% ABV). Upon producing my ID at the counter, I spy a baseball cap that reads "BEER IS MY LIFE." Almost every visible word is in all-caps.

The beer gelato's delicious, sweet and malty with the aftertaste of dark oatmeal stout. I finish it and remember that it's this kind of twisted comfort food that's kept me coming back, even after moving east to the land of Cronuts and Grimaldi's. 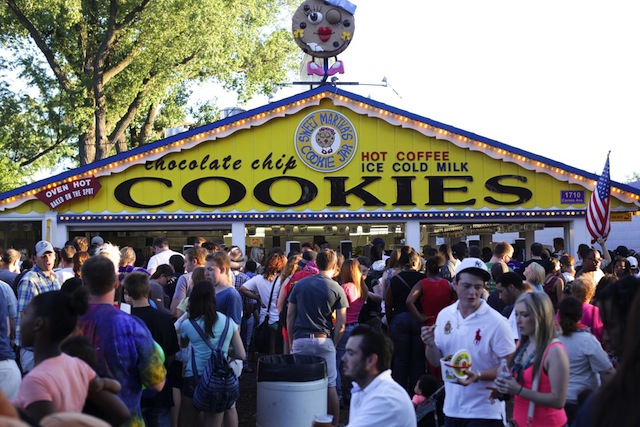 Sweet Martha's Cookies are another perfect example. $16 gets you a plastic pail overflowing with just-baked chocolate chip cookies, and an all-you-can-drink refillable cup of milk is only $2 more. The cookies are rapturously good—soft, warm, and palm-sized, it's easy for a group to polish off a bucket before they go cold.

Elsewhere, a small yellow stand near the midway's entrance boasts Snickers bars and Reese's peanut butter cups, slathered in batter and deep fried. Somehow their sugars and oils blend together and remain structurally sound; the final product, of course, is served on a stick and has the highest calorie-per-bite count of all fair fare.

At the midway, I sample a "kids portion" of new-for-2014 PB&J french toast, beginning to wonder how much more my stomach can take. The man in the "DUCT TAPE" shirt walks past my bench with an inflated beach ball under each arm and a basket of cheese curds clutched in each hand. I'm confused how he got that way, but he walks on, resolute.

Jacked up on sugar and multiform lipids, The Fair's crowded midway is a whirl of sensory-overload not so unlike SoHo on a busy summer weekend. Miles of flickering neon cover the rides, and the paths are filled with tired parents and noisy, happy kids. More beach balls fly and teen couples make out and share giant root beer floats. I get distracted by folks haggling—heatedly haggling—with a vendor selling something called Brandles. 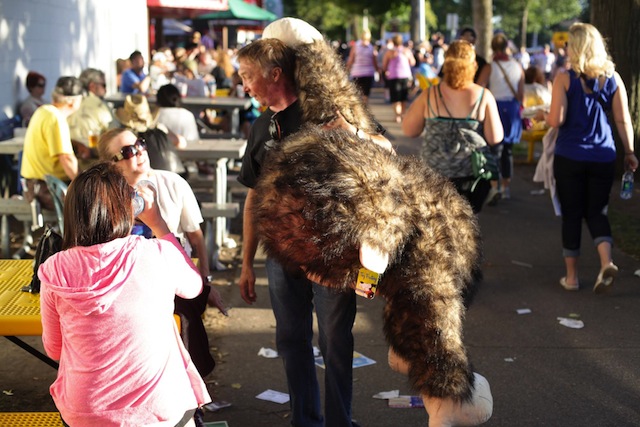 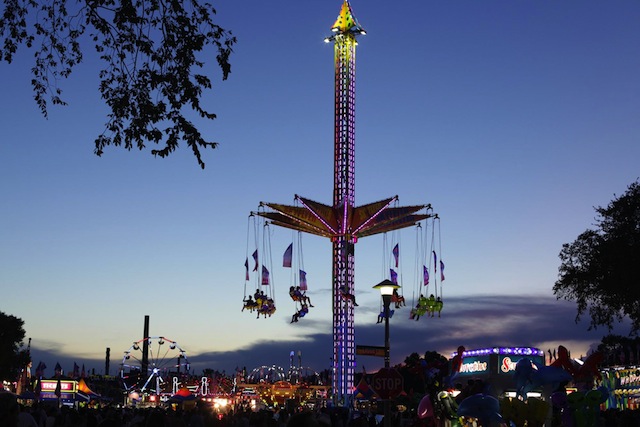 I chew egg, ham, sausage, and pancake and lick maple syrup off my fingers. I've reached The Fair's 2014 gastro-zenith: the deep-fried breakfast sandwich, which is basically a McGriddle dipped in batter, fried, and skewered. Syrup and powdered sugar are put on top like a dare to my arteries to continue to properly function. The Ferris wheel's colors begin to blur together and ZZ Top is blaring at me from all sides. My stomach feels curdled. Was this all a mistake? Has The Fair conquered me? Why does the Whac-A-Mole sync up with the murmurs in my chest?

But this is the Midwest and when you need to escape disaster, all you do is pick a direction and walk 10 minutes. I leave through the midway's gate and walk away from all the noise into an evening that's become cool and almost silent. I find a tree and lean against it, breathing slowly and feeling better. My stomach has settled; digestion has done its job. A little more walking and I've found my car, and my headlights brush a sky lit by very many stars.

The Fair's crowd is different: more temporary and performative than those of New York City. People dress and act outrageous, eating lunatic levels of food, because they know that the chaos is only just-for-now. They'll go home to either cul-de-sac houses or apartments that sit along silent streets. Minnesota is a state of swift respite; The Fair is its hokey and flat-out weird attempt at playing dress-up as something sprawling and noisy. It's also honest, historic, and steeped in the good nature of people unworried by fashion shifts, scaffolding, or neighborhood trends. Next summer, you'd be wise to go and experience it for yourself, if only for the enriched moment of quiet that comes after.