Photos: Everyone In NYC Is Currently On Line At The Grocery Store

We may never be able to leave our apartments again once this blizzard starts dumping all its cloud excrement on us. Supplies will run out, the whiskey well will run dry and seasons one through three of Jem and the Holograms will expire from Netflix, leaving us hungry, sober and alone.

But New Yorkers are already out to save themselves from this truly outrageous fate by forming what are known as "lines" outside food-distribution establishments. Apparently one waits on these "lines" to be given access to a "grocery store" where one can procure "food" to weather this "historic storm." It all started last night:

At the Park Slope Food Co-Op...

The situation at the @foodcoop has now been elevated to defcon 11 (politely) forming a line down the block. pic.twitter.com/sDyFhvXzeB

Biggest snowstorm since 1996 = panic in park slope. Check out this line of ppl looking to get into @foodcoop pic.twitter.com/jfS82tFfC6

@foodcoop is at capacity making it the hottest club in the Slope pic.twitter.com/fwzsL3mopd

Be warned: @foodcoop is at defcon 10 (in a groovy way). pic.twitter.com/DGoWdFqHst

But at least one person was felling truly #blessed by the madness:

Trader Joe's shoppers—known for their measured storm reactions—weren't going to be left out:

Annnnnnd there's a line of people wrapped around the corner waiting to get into Trader Joe's. pic.twitter.com/xMxlISBpw0

This is the line to get into Trader Joe's on the Upper West Side, up Broadway and around the corner onto 72nd. pic.twitter.com/Lyc8c2RcnP

This is actually a pretty normal sight at the TJs on 14th Street—god bless their Hawaiian-shirted efficiency!

Line at Trader Joe's right now. I got in and out fast, though. pic.twitter.com/uk1UYUdMCh

And don't forget the Upper East Side!

Lines at Fairway on 86th out the door #PIXBLIZZARD #Blizzard2015 pic.twitter.com/Ez4xaIwUwd

Other city denizens were stoic enough to wait until this morning to stand in a line in the blowing flurries. Gothamist executive editor Jen Chung captured panic on the Upper West Side this morning, with epic congregation outside Trader Joe's again:

And the Fairway on Broadway, which boasted not only a line to get in... 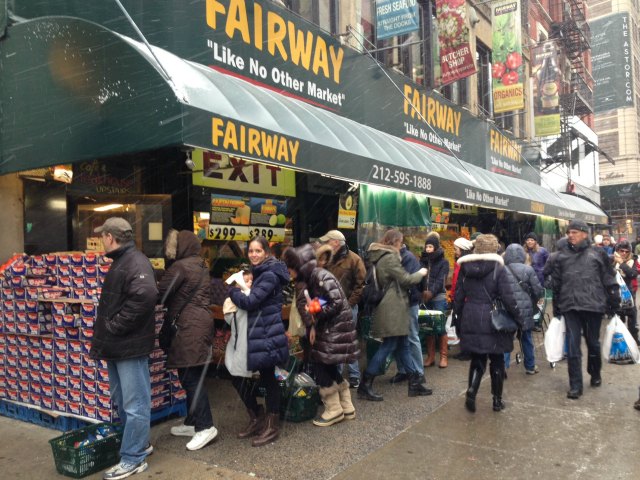 ...but another line when it was time to pay!

Elsewhere on the UWS:

Whole Foods won't go down without a fight:

Line at @wholefoodsnyc right now is out of control #Snowmageddon2015 pic.twitter.com/vqCgvurAAY

OH: "Stay away from Whole Foods right now -- it's like a yuppie Mad Max scene!!!" #snowpocalypse

Wholefoods Bowery out of carts. It's a mad house in here. @evgrieve @LoDownNY #snowpocalypse pic.twitter.com/ImyR8pUOSJ

Meanwhile, back at the Park Slope Food Co-Op...

Guys, DO NOT go to the Park Slope Food Coop right now. It's crazy in there. pic.twitter.com/ewDnotCFrV

A worker at the co-op told us they "keep getting deliveries" and that he kept hearing about items being restocked. Don't worry: the kale is safe—sort of!

The great pre-storm Kale Panic of '15. (Yes of course, this is the Gowanus Whole Foods) pic.twitter.com/OS50ntIatK

And if you still need milk, you've got options...

my roommate and if didn't coordinate very well with our pre-storm groceries. BUT IF ANYONE IN EAST HARLEM NEEDS MILK, WE HAVE SOME

Still got the staples out here in Flatbush pic.twitter.com/XIEaW1HCIC

The real Blizzarding won't begin in earnest until later this evening, so if you're more of a last-minute panicker, you've still got some time (unless the subways are shut down). Gotta get that bread and milk before it's too late!

#Blizzard
#blizzard 2015
#grocery stores
#lines
#panic
#snowpocalypse
#original
Do you know the scoop? Comment below or Send us a Tip