If you were anywhere in the vicinity of the northwest section of Flushing Meadows Corona Park on Saturday evening, you are now most likely aware of the Queens International Night Market, which kicked off its second season at the NY Hall of Science this weekend. Massive crowds showed up to nosh on squid skewers, arepas, Japanese curries, Korean corn dogs and okonomiyaki, making it difficult to actually procure said items.

"Within five minutes of gates opening, lines were ten to twenty people deep. It was impossible to move within half an hour," photographer Clay Williams tells us. "Even the corn and skewer vendors outside the park had ten minute lines. And the traffic. Oh my god, the traffic." Subway congestion was intense, too, with some people waiting 30 minutes just to exit the station at the 111th Street 7 train stop. 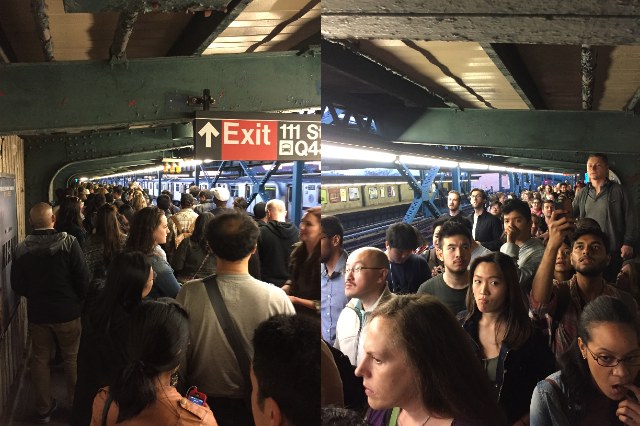 People were coming into the station from the Market but more people were trying to get off. There was total gridlock by the turnstiles and emergency exits. More trains kept coming to drop people off on the platform, although there was no room and people were starting to get panicky/pushy. There was no crowd control any sort, it seemed like a disaster waiting to happen.

The Market experienced a similarly large influx of hungry hordes on its opening night last year, after which founder John Wang mades some adjustments to offer more crowd control. This year, that included nearly double the food vendors—though it seems that wasn't enough to sate the masses. "They either need three times the vendors in order to reduce lines, or need to pray that this weekend was just a big crowd because it was the opening night," muses reporter Scott Heins, who was also in attendance.

Wang tells Gothamist that "tens of thousands more people showed up" than he or anyone else was expecting, due in part to the nice weather and some confusing social media event pages that weren't sanctioned by Wang and his team. "To the visitors and surrounding community, you have my sincere apologies for the inconveniences and the lines, but not one person involved even remotely suspected the magnitude of the turnout," Wang says. "We are working hard to prepare for next week (and the sixteen following Saturdays) to have more contingency plans in place in case something so unexpected happens again."

Though the food vendor area may have been insanity, the space also included a large swath of picnic tables and plenty of grass to eat and escape the crowds. On a beautiful, warm Saturday evening, like it was this past weekend, it looks like a nice place to chill—if you can survive the food service gauntlet. And maybe consider biking instead of driving or taking the subway, too.

#flushing
#outdoor market
#queens
#queens international night market
#original
Do you know the scoop? Comment below or Send us a Tip