A hundred years from now, when the last remnants of the human race are scattered across the solar system in rickety space stations living under food powder rations and martial law, there will still be bars, and odds are they'll look like Jupiter Disco, a new Bushwick outpost that embraces the aesthetic of digitized decay. Hiding behind a grimy brick front on Flushing avenue, it's the kind of place you'd expect to find while searching for a gangster who could smuggle you to Phobos.

Founded by cocktail bar veterans Al Sotack and Maks Pazuniak, Jupiter Bar's concept is born out of the pair's deep love of science fiction writers like Gene Wolfe and Frank Herbert. Inside the long, narrow room things are meant to feel scavenged—dim tungsten light emanates from steel fixtures that once hung in a Pennsylvania factory, and a spectrum analyzer sits beside the top shelf liquor. Closer to the ceiling are more neon lights, a working reel-to-reel tape machine, a CRT television, and an Atari console. 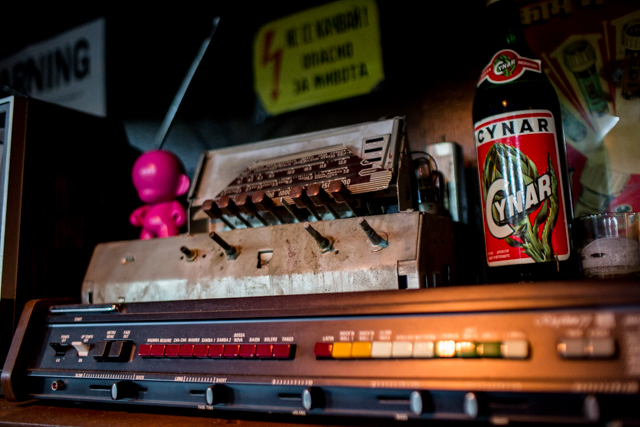 "Found materials fit into the idea of a bar near the end of time," Sotack said. "But the theme goes beyond the bric-a-brac. Every cocktail and draft beer is finite, and as things run out they're deleted from the menu." Jupiter Disco's menu scrolls constantly on two televisions above the bar, written out in green block text reminiscent of IBMs circa 1981. The same menu can be found on the bar's website, but as ingredients run out, drinks are crossed of the list and never return.

Cocktails hover in the $12 range and include the Ancillary Justice (named after the Ann Leckie novel), a spicy mezcal-infused old fashioned mixed with celery bitters and apple honey. Also on the menu is Pazuniak's Dandelion Soda, which comes served in a collins glass filled with jamaican rum, lime, cacao, and dandelion amaro. Four beer taps will rotate constantly with whichever beers Jupiter chooses to scavenge, and hungry patrons can order empanadas at the bar. 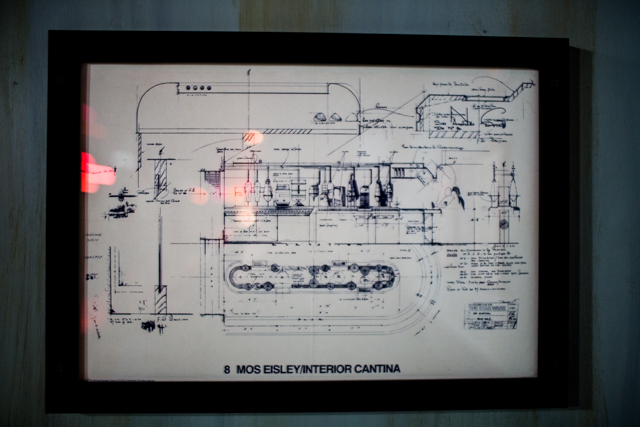 A framed blueprint of the Mos Eisley "Star Wars Bar" adorns the wall behind one of the bar's cushy banquettes, and the sound system is powered by a homemade rotary mixer. Combined with Sotack and Pazuniak's affection for booking eclectic, genre-bending DJs, Jupiter Disco manages to strike the perfect midpoint between industrial dive and kitschy theme bar. The place oozes retro-futurism that's cool, and never cloying. If Blade Runner is your dystopia of choice, then you should be drinking here.

#bar
#bushwick
#jupiter disco
Do you know the scoop? Comment below or Send us a Tip