Photos: Chumley's 2.0 Makes Its Grand Re-Debut In The West Village Chumley's, the legendary speakeasy on sleepy Bedford Street in the West Village, has been through a lot. Its oldest history is full of tales of murders, raids and historical figures; its nearer history includes a wall collapse, NIMBY blockades and further delays. But now, at long last, Chumley's looks to have a secure future—at least insofar as the doors are open and it's back in business.

Now under the care of Sushi Nakazawa's Alessandro Borgognone, Chumley's has a much more swanky feel than the semi-dive of yesteryear. The space's been completely redone with swank leather booths, antique-type wallpaper and a generally upscale atmosphere. Portraits of literary greats and broadcasting giants observe as diners tuck into plates of beef tartare and Crispy Chicken al Cognac. Hundreds of frayed book jackets, rescued from storage in Long Island City, ring both rooms of the restaurant. 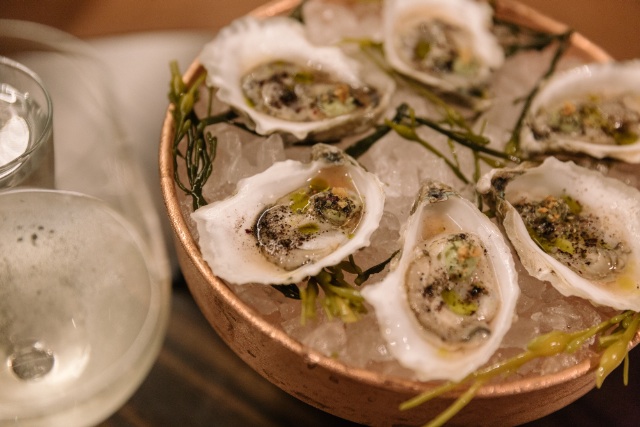 And restaurant it is. As part of a promise to the community, Borgognone has created an "elevated" Chumley's that's more of a sit-down affair than a more casual spot for drinking. The classics teased prior to opening include the 86'd Burger ($25) with bone marrow (Chumley's is said to be where the restaurant industry term '86'd' originated), Country Terrine ($18), Warren Cove Oysters ($22) with avocado mignonette and crispy garlic, and a Steak for Two ($MP) with roasted onions.

The extensive drink list comes with a table of contents, including $16 cocktails and an impressive spirits collection that leans heavily on Scotch whiskey.

#chumley's
#historical bars
#new restaurant and bar radar
#speakeasies
#west village
#original
Do you know the scoop? Comment below or Send us a Tip