Remember when you could buy a donut in Williamsburg for a buck? Then they started calling them doughnuts and adding hibiscus or some shit and the price went up to 3 bucks. Well now Chef Björn DelaCruz of Manila Social Club has risen the douche bar all the way up to $150. For a donut that you will consume in under 2 minutes.

His latest creation has Patrón in it and looks like a piece of jagged scrap metal. 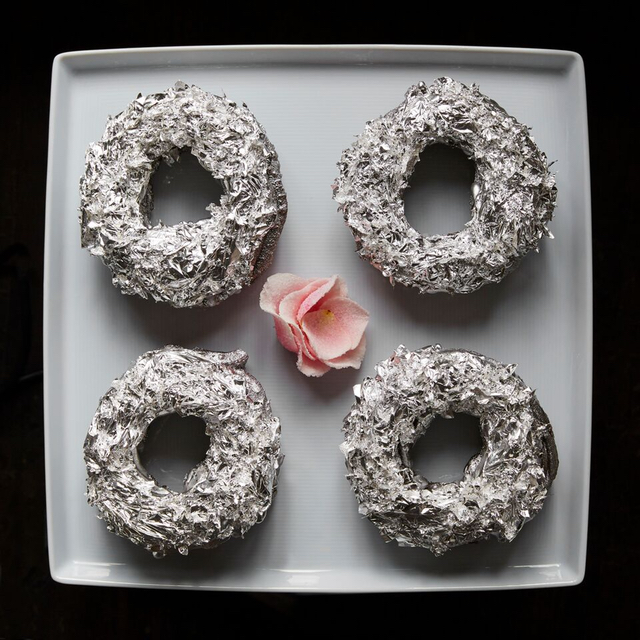 On his inspiration behind selling a $150 donut, we are told: "Björn was looking to up the ante after the success of their viral Golden Cristal Ube Donut—and what’s more precious than gold, Platinum. He created a limited edition, uber-luxury donut..." Okay we've heard enough.

DelaCruz's latest attempt at food virality is described as a "rose petal donut filled with cream and a spicy ginger-jalapeno margarita jelly, covered in a sweet tequila frosting, and then finally topped off with sheets of edible silver and platinum." Each donut is about 6-inches, which comes to about $30 an inch (an amount of money that could get you six donuts at Doughnut Plant).

If you would like a donut that tastes like a Spring Break hangover, you'll have to put in a special request during the week of Cinco de Mayo (which you can do here).

If you got this far, we regret to inform you it gets worse: he's calling it The Patronut... and the people of New Williamsburg are actually going to buy it.

Update: We are now told that the proceeds from the donut—which will only be offered for one week—will go to the American Cancer Society.

#donut
#doughnut
#expensive donut
#manila social club
#platronut
#The Patronut
Do you know the scoop? Comment below or Send us a Tip
A new Gothamist is coming! We’ve moved comments over to our beta site. Click here to join the conversation and get a preview of our new website.