The social media foodiverse has been blowing up over the past few months with shots of the Rainbow Bagel—the Rainbagel™?—the hottest food trend to grip the city since the Cronut. These swirled delights oozing with funfetti cream cheese are all over Instagram, and people with too much time on their hands have been forming long lines outside the Rainbow Bagel-making Bagel Store on Bedford Avenue and South 4th Street in Williamsburg.

Now the folks at The Bagel Store have put a new twist on the classic bagel shape—while on assignment to obtain the world's newest trendy foodthing, I stumbled across a rare breed of rainbow bagel, as handed to me by the man behind the counter. He called it a "rainbow heart bagel."

"It's the first ever," the Rainbow Bagel Maker told me. As you can see, it looks just like a Rainbow Bagel, but it's been shaped into a heart and dusted with hot pink sprinkles. As for the taste, it's a bit better than the Real Rainbow Bagel—my heart bagel was warm and soft, like a real heart. And its consistency landed somewhere between a fresh bagel and an Olive Garden breadstick.

It is unclear whether the heart bagel will be available for sale any time soon; one employee told us it was actually for Valentine's Day, so we may have happened upon a Bagel Unicorn here. For now you can satisfy your colorful cravings with one of their their Breaking Bad-themed "crystal meth" bagels, also crusted in sugar. 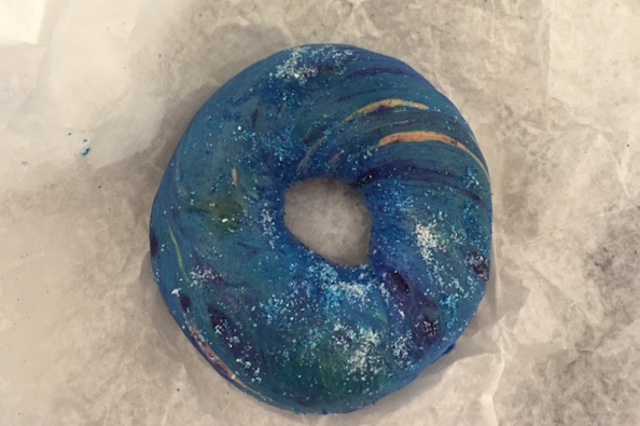 #bagel store
#rainbow bagel
#the bagel store
#williamsburg
#original
Do you know the scoop? Comment below or Send us a Tip